Soli & Shon Greenblatt are the proud parents of Ariana Greenblatt –currently a competing on Dancing With The Stars Juniors.

The couple welcomed their daughter on August 27, 2007. Ariana Greenblatt quickly gained fame for her role as Daphne Diaz on the hit series Stuck in the Middle.

Since then, the 11-year-old has appeared in other projects including her first role on the big screen, in the film A Bad Moms Christmas. Most recently she played a young Gamora in Marvel’s Avengers: Infinity War and finished filming Disney’s, The One and Only Ivan.

Arina is now trying her luck with dancing by appearing on DWTS Juniors. The young actress is partnered with Artyon Celestine and mentored by Brandon Armstrong. 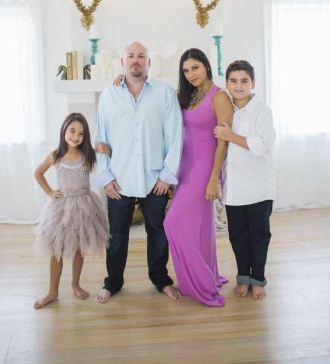 Soli and Shon Greenblatt are also parents to Ariana’s older brother, Gavin. There’s no doubt they are her biggest fans.

In addition of being a wife and busy mom of two, Soli Greenblatt spends her time baking delicious cakes. She specifically has serious decorating talent, we hear.

Soli who is short for Solimar was born, December 23, 1978 in California.

Ariana’s father, Shon Greenblatt happens to be a former actor and son of noted Broadway producers – Kenneth D. Greenblatt and Sandra B. Greenblatt.

Shon was born on May 13, 1967; the Rockland, NY native trained at the Stella Adler Conservatory and according to IMDb he participated in a number of projects including Chopper Chicks in Zombietown, Just Perfect, Freddy’s Dead: The Final Nightmare and Newsies, among others.

According to his LinkedIn, Shon left showbiz and is currently a Digital Marketing Specialist. He is listed as EVP Sales & Strategic Partnerships at Digital Media Solutions Group.

He also served as senior director for online product, development and management at MediaWhiz Holdings LLC. In 2013 he was named Vice President of Global Education at Zeta Interactive.