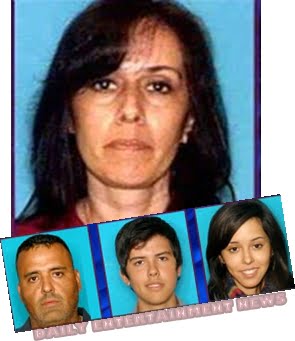 A family of four has been brutally killed in Mesquite, Texas. The mother, Angelica Vazquez, killed her husband and their two children for some unknown reason, and then killed herself, according to police. The bodies were found Wednesday, days after they had been shot.

43-year-old Angelica shot and killed her husband, 44-year-old Marcelo Vazquez, and their two children Paulina Vazquez and Alejandro Vazquez, in their home on the 1400 block of Paintbrush Street. Alejandro (Alex) was 18 years old. He graduated from Mesquite High last year and was attending nearby Eastfield College.

“He was the sweetest thing,” said Miranda Arnette, 16, who used to bowl with Alex on their high school team. “He could light up a room with his smile.” Paulina was 21, she attended the University of North Texas in Denton and was home for spring break. Friends say she was popular and performed on her high school drill team.

“She was a sweetheart,” said former classmate Marissa Arnette, 19. “She never had a bad thing to say to anybody.”

Neighbors called 911 on Saturday after hearing gunshots at 6:30 a.m., police arrived but didn’t came inside the house. The same officers returned on Wednesday and discovered newspapers and mail that had piled up, so they entered the home. The bodies were found in different rooms of the house.

Angelica’s husband Marcelo worked as a truck driver, and she worked at a school. Sources say she had recently been diagnosed with cancer, and was undergoing chemotherapy.

Angelica like her husband were from Zapotlanejo, she was also known by her maiden name Angelica Sandoval she was born on May 13, 1969. Her Fb is here.

What was Angelica Vazquez thinking right before she murdered her entire family and then took her own life?