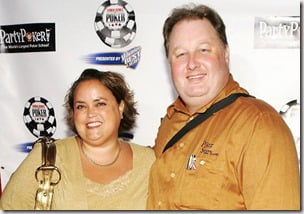 Meet Cheryl Raymer she is the wife of Greg Raymer the pro poker player who has recently been linked to a prostitution ring that might not just cause issues in his professional life but also in his personal life at home.

48-year-old Gregory “Greg” Raymer aka The Fossilman” won $5M at the 2004 $10.000 No Limit Texas Hold’ Em World Championship, last year he won 4 Heartland Poker Tour Events his winnings were over $7,200,000 the latest of this veteran poker player is that he was busted by the Wake Forest Police at a NC hotel  where he thought he as about to hook up with a prostitute after he responded to an ad posted by the police.

Greg is as we all know married to his wife 48-year-old Cheryl Elizabeth Raymer born on January 1st, 1965, she is the proud momma of the couple’s daughter Sophie. Cheryl and her family live in Raleigh, NC.