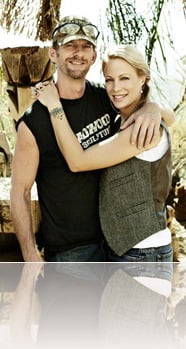 40-year-old Alison Eastwood the eldest daughter of actor and director Clint Eastwood and his first wife Maggie Johnson. Alison studied acting at the University of California, made her film debut at the age of 12 in Tightrope, she was then seen in other films including  Midnight in the Garden of Good and Evil which was directed by her father. Alison’s good looks deserved a magazine cover, well actually several including Playboy in 2003.

Thee days Alison Eastwood now Alison Poitras is a designer of her own clothing line Eastwood Ranch and enjoying her time in the small screen at Nat Geo Wild TV program Animal Intervention and certainly we all saw her with Stacy at Chainsaw Gang. 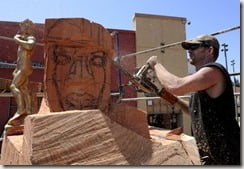 45-year-old Stacy B. Poitras was born on September 17, 1967, he grew up in Plymouth, Massachusetts graduated in 1985 from Plymouth High School, after that he attended for more than two years at School of the Museum of Fine Arts in Boston, got a major in painting but then got into chainsaw sculpting

Last November he made his debut along Alison at Chainsaw Gang. Poitras met her in 2008 when she showed up at his studio in Rustic Canyon Store in Cali riding her horse, Stacy and his pretty girlfriend announced their engagement last Christmas. 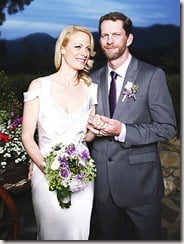 Stacy Poitras and Alison said I Do o Friday, March 15th, 2013 in Calabasas, California their wedding rings were designed by Philip Press, she wore a 1930s inspire wedding dress designed by  Les Habitudes.