Davey Blackburn is an Indianapolis pastor whose wife, Amanda Blackburn lost her life today after she was removed from a ventilator. Most recent updates say her death has been ruled out as a murder. She was 12 weeks pregnant with her second child.

Davey’s wife was the victim of a home robbery two days ago, reports say she was shot in her home Tuesday morning.

The Indianapolis Metropolitan Police Department confirmed Wednesday evening that the shooting occurred during a robbery.

After she was shot and critically injured she was rushed to the hospital and put in a ventilator.

Her death sparked a loads of sympathy and prayers on social media throughout the day Tuesday and Wednesday as friends, family members and strangers mourned with public posts.

Davey Blackburn said about his wife, following her death:

“My wife was such a beautiful, gracious, loving woman of God. I have not only lost my ministry partner and support but also my very best friend,”

Davey Blackburn, and Amanda moved to Indianapolis in 2012 from South Carolina to start the Resonate Church, an independent church on the Northside. 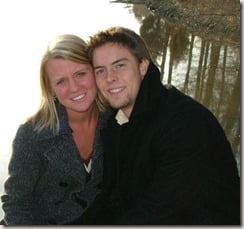 Davey Blackburn is the lead of Resonate Church. According to the church website, Davey Blackburn spent 4 years on staff at NewSpring Church in Anderson, SC under Pastor Perry Noble. NewSpring now sees over 30,000 people attend church each week. Davey served as a Youth Pastor, Production Director, and Associate Campus Pastor before NewSpring helped Resonate plant in 2012.

Amanda is survived by her husband, and their toddler son, Weston. According to the Daily Mail, she was shot in the head while trying to protect Weston. The couple had been married since August 1, 2008.

The wife and mother of one, was the daughter of the lead pastor at First Baptist Church in Elkhart, Indiana. Davey Blackburn is originally from Tuscaloosa, Alabama. He studied Religion at the Southern Wesleyan University.

Amanda’s murderer is still on the loose.