Gayle Newland is a young woman who pretended to be a man in order to have *** with a friend! No, we are not joking, in fact, it might sound like a joke but the whole charade is so serious, now the 25-year-old will spend 8-years locked up!

Recent reports, indicate Gayle Newland has been found guilty of three counts of sexual assault. Newland’s name first came up back in September, when she was convicted for impersonating a man to dupe friend into having ***.

Gayle Newland adopted the identity of ‘Kye Fortune’ and created a fake Facebook profile, which she used to befriend her victim. Reports say she and the other woman dated for a span of two years, during that time, she told the victim, ‘he’ was self-conscious about ‘his’ appearance after hospital treatment. The perfect excuse to make her wear a blindfold during their meetings.

Gayle Newland even covered her chest and wore a woolly hat and swimsuit to disguise her appearance. She used a prosthetic ***** on the roughly ten occasions the pair had ***. Her victim find out of her true identity after she removed the blindfold during their last session together.

Gayle who is from Willaston, Cheshire –has identified herself as a ******* since primary school, the Daily Mail reports.

She earlier told the court that she was ‘sickened’ by the revelation and that ‘at no time’ did she consent to *** with the use of a prosthetic.

Newland, denied the charges and told the court that she and the victim were engaging in role play and fantasy as they struggled to accept their sexuality.

But according to The Guardian, she had admitted using a male alter-ego called Kye Fortune to get closer to girls, saying she was not comfortable with being gay and found it easier to approach women that way. 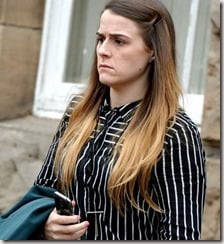 During her trial, the court heard how her accuser, also 25, said she and Newland had spent a number of hours talking on the phone since 2011, they finally decided to meet in 2013. The complainant told the court when she agreed to have *** with Kye she thought he was a male and even told her co-workers she was engage. The victim also told the court she is not into women and would have rather be raped by a man.

Sentencing, Judge Roger Dutton said Newland was “an intelligent, obsessional, highly manipulative, deceitful, scheming and thoroughly determined young woman.”
Today, Gayle Newland –who worked as a marketing manager –was sentenced. Reports say things got dramatic for the 25-year-old who had to be physically removed and was heard screaming, telling her family she was scared.