Kirby Hoag is the lovely wife of political strategist, Adam Parkhomenko –who worked as a Hillary Clinton aide.

Kirby’s husband, who has been described as a Hillary Clinton superfan in the past, mocked polio survivor and Senate Majority Leader Mitch McConnell –for tripping.

Originally from Arlington, VA; he began writing letters to politic at age 13, asking them for a signed head shot.

He served as part-time D.C. reserve officer and the director of grass-roots engagement for the Hillary Clinton presidential campaign. The 33-year-old is known for having dedicated much of his life, since age 17, to Hillary Clinton’s ascent to the presidency –so much that he even put off college to work for her, then started the Ready for Hillary super PAC. 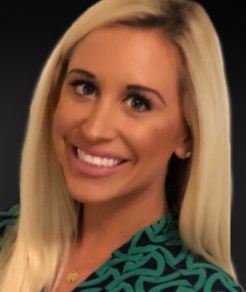 His dedication led him to be the youngest paid employee on the Clinton team at the end of 2003 and when she was running in 2007, Adam had front row seat. However, after the campaign floundered he left. Later, he gave it one last push, starting VoteBoth.com.

At 22, he decided to go through the police academy. After graduating, he got a badge and a gun, and worked 20 to 30 hours a month on patrol as an unpaid volunteer.

In 2009, he ran for an open House of Delegates seat from Arlington. He came in third. Meanwhile, he finished his college degree and met his future wife, Kirby Hoag. The two tied the knot in 2015.

In 2013, Kirby’s hubby felt the lure of politics again and he launched Ready for Hillary with great success, hauling in $4 million in the first year, $9 million in the second.

Kirby Hoag is a Ready for Hillary veteran. The lovely blonde served as deputy operations director and was previously a cheerleader ambassador for the Washington Football Team.

The former Redskins cheerleader is also the mother of the couple’s son.

According to her LinkedIn, she is a Sales Associate at Ixcela, Inc. –where she helps clients improve their gut microbiome through the Ixcela experience.