Ever heard of a country rapper?! Well, Whitney Deann Smith sure has, she is the soon-to-be ex-wife of music artist John Lee Smith, aka Big Smo. You might recognize them from the AE reality TV show “Big Smo King Of Hick-Hop.”

According to recent reports, the couple is currently divorcing and things are getting nasty! Radar Online reports,  the country rapper served divorce papers to Whitney Deann Smith in August, for Whitney it meant her suspicious of her hubby having another gal were confirmed.

Sources close to the couple reveal, Whitney Deann Smith flipped one she was hit with divorce papers. The 27-year-old blonde allegedly took a shovel out of the garage and started smashing the windows on the vehicles and slashing the tires on the vehicles in the compound,” the insider said, revealing that A&E production vehicles were also damaged in the incident.

As a result Big Smo filed a restraining order and Whitney Deann Smith was taken to a hospital to get a mental evaluation. 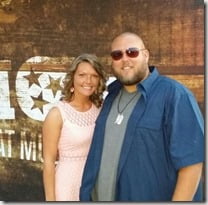 Whitney Deann Smith and Big Smo, tied the knot just two years ago, but they had been living together for almost a decade. The former couple used to live at his family farm, the “Kuntry Ranch”, in Unionville, Tennessee.

Big Smos’ style is a fusion of country music, Southern rock and hip-hop. He’s been around since late 90’s; his debut studio album, Kuntry Livin’, was released in 2014 and charted on three Billboard charts.

He was previously married and from that union he is the father of two children.

According to her TV profile, she is a great cook who enjoys gardening. On Facebook she can be found as Whitney Crocker Smith.

Big Smo is worth approximately $5 million dollars, think Whitney Deann Smith will get some of that?

You can find Whitney Deann Smith on Twitter here.