This summer we’ll enjoy of one fo the most expected weddings in royalty. Sofia and Carl have been dating since 2010 and now finally 5-years-later they will tie the knot.

Sofia has expressed to Swedish media that she and her handsome fiancé are “very excited” and “a little tense.”  She has also said that she is looking forward to becoming part of the royal family.

Once the TV star-turned-charity fundraiser says “I Do” she will be known as HRH Princess Sofia, Duchess of Värmland. 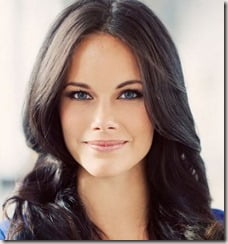 Sofia has great taste in fashion, she shows a penchant for bold colors, sleek silhouettes and elegant eveningwear.

The stunning brunette, was born in Täby, Sweden. The daughter of Marie and Erik Hellqvist was raised in Älvdalen.

Believe it or not, Sofia attended the Institute of English and Business in New York where she studied accounting with computer application. Hellqvist worked part-time as a waitress and glamour model in Stockholm but gained notoriety in 2004 after she posed for men’s magazine Slitz and was offered a spot on the reality show Paradise Hotel on TV4.

During her time in NY, she became a yoga teacher. According to Wikipedia, she allegedly did a **** video with **** star Jenna Jameson, however Sofia is a true example that a regular pretty girl can get her fairy tale wedding.