Meet Rain Hannah the current squeeze of 54-year-old vocalist and musician, Vincent Neil Wharton aka Vince Neil –who is due to appear on June 24 Episode of ABC’s ‘Celebrity Wife Swap.’

Rain’s man is a father of three and has had his fare share of women in the past, Vince has been married four times. His first tied the knot in 1981 to Beth Lynn,  they divorced in 1985. The couple became parents of daughter Elizabeth “Elle” Ashley, born in 1983. His first son is Neil Wharton born in the late 70’s. 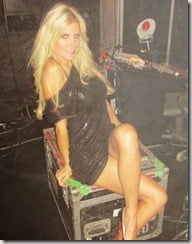 Neil married mud wrestler and fashion model Sharise Ruddell, in April 1987. The couple had one daughter, Skylar, before divorcing in 1993. Skylar died of cancer at age 4 in 1995. Actress and Playboy Playmate Heidi Mark became his third wife in 2000. They were set up on a blind date arranged by her makeup artist in early 19993. After just 15 months of marriage, and several attempts at reconciliation, they divorced in 2001.

In 2005 he made Lia Gerardini, his fourth wife, by 2010 he announced their separation.

According to loudwire  Neil and Hannah-who is a makeup artist –live a rock star lifestyle in Las Vegas. Everyone knows who Vince is just by mentioning his name but his lovely gal might be stepping on his toes! 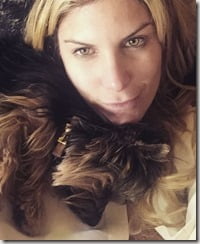 Rain’s page says her brushes have touched the faces of several of Hollywood A-Lister’s such as Kirsten Dunst, Paris Hilton, Mandy Moore, and Britney Spears to name a few.

Rain co-founded the first online makeup school with her partner Alfredo Andreani. The gorgeous blonde also co-founded a company of unsurpassed quality cosmetics. In the beginning of 2014 she launched Serendipity Beauty www.serendipitybeauty.com with her dear friend and mentor Brian Fox. Hannah literally made headlines across the country as an entrepreneur always reinventing herself.

She is graduate of the University of Nevada, Las Vegas with a bachelor’s degree in Communications. You can check more about her here.