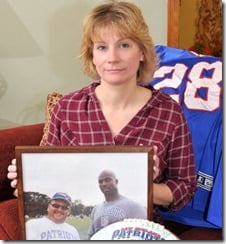 In what has been a tumultuous offseason for the Patriots already, the bad news and negative media attention keep on coming! Meet Kimberly Chartier, she is the woman that could become a multimillionaire if her lawsuit against the Pats comes though.

$10 millions to be exact is how much she could win but on what cost? Kimberly Chartier of Chicopee, Mass., is suing the Patriots, the NFL and three other parties for the wrongful death of her husband, Jeffrey Chartier back in 2010.

Kim’s husband, then a 40-year-old died of a heart attack and the suit alleges his death was a direct result of the conduct displayed by a security guard named Arthur Sherman, who allegedly confronted Chartier about the presence of his son, Tedy, on the field prior to the game.

Remember Pats’ Sept. 12, 2010 home opener against the Cincinnati Bengals? Well that was the game in which her husband sadly did not come back home after. According to the lawsuit, NFL officials approached Chartier and his then-six-year-old son prior to the game and asked if Tedy would be interested in coming on the field to take some photos but not knowing this the security guard still gave Jeff and his son some hard time saying Tedy didn’t have the credentials needed to be on the field.

After the heated argument with Sherman Kim’s hubby returned to his seat before he ultimately suffered a heart attack triggered by what the suit calls an “angered and extremely agitated” state. The heart attack led directly to Chartier’s eventual death.

Jeff Chartier died as a result of cardiac arrest that was precipitated by agitation and stress caused by an interaction with a security guard at Gillette Stadium who inappropriately and unnecessarily confronted Jeff Chartier and his son Tedy in a harsh, unprofessional, confrontational, disrespectful and antagonistic manner.

Kim who’s maiden name is Girard was born Kimberly Ann Girard, she was married to Jeffrey A. Chartier and is the mother of a nine-year-old boy.

The widow woman is a former president of the Parent-Teacher Organization at the Chicopee’s Holy Name Shcool. She enrolled her first child in the pre-school program, and over the course of seven years, she says she’s seen parents and students bonding at movie nights, a Bingo for Books program, field trips, New Year’s eve parties, the annual Pumpkin Fest and St. Nick’s Shops and at the parent-teacher group’s regular meetings. The school closed last year, she said at the time

“Holy Name is like home,” “it is not about the school closing, but more about celebrating 145 years of memories and friendships,”

We are sorry for her loss, you can find her on Facebook here.