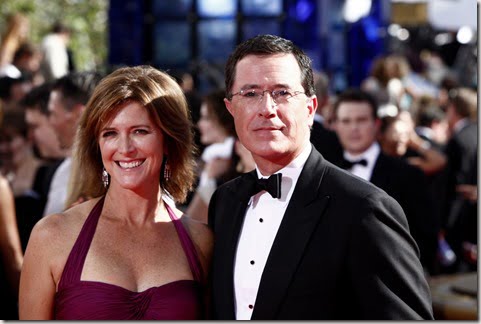 PinMeet the wife of the new hos of “Late Show,” that’s right CBS just confirmed the news today! Evelyn Colbert’s Emmy Award winner hubby, Stephen Colbert who is currently host of the satirical news show The Colbert Report has been appointed to replace David Letterman, when he stands down from one of the most coveted slots on US television in 2015, after 21 years. Why don’t we get to know him  up-close, and to do that we would like to tell you about his lovely wife Evelyn McGee Colbert. She is the daughter of Joseph McGee, a prominent Charleston civil litigator of the firm Buist Moore Smythe McGee. 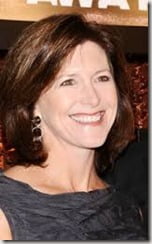 Pin She was born Evelyn Brabham McGee, she actually grew up two blocks away from her husband but did not meet him until 1990 and became officially Ms. Colbert on October 9, 1993. She is the proud mother of Colbert’s three children; Madeline, Peter and John. Evelyn first meet her Stephen Colbert at the “Spoleto Festival” in Charleston, South Carolina. 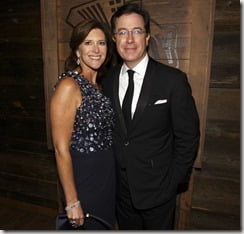 Pin Although she has been described as an at-home mom, McGee who has been married to Colbert since 1993 has also giving us a taste of her talent. The occasional actress delighted us in The Hobbit: The Desolation of Smaug (2013), Strangers with Candy (2005) and Strangers with Candy (1999). She is always seen wearing a smile proudly next to her husband during events and red carpets. She attended the University of Virginia’s College of Arts and Sciences and graduated in 1985. She double majored in Drama and English. Evelyn also participated in several summer productions of the Heritage Repertory Theatre. On January Evelyn guest starred in the series finale of ‘Alpha House’ on Amazon Prime. Ms Colbert had a small part as a reporter from Fox News Sunday who attempts to gain an interview with Senator Gil John Biggs (John Goodman) while at the funeral of another senator. Earlier this year she also appeared at Madison Public Library, New Jersey for a free reading; she was featured in ‘A Crime in the Neighbourhood’ a James Glossman’s adaptation of Suzanne Berne’s novel. Humor has got to be one of the secrets to their 21-year-long marriage right? But being the wife of a comedian also has it’s boundaries. The couple has stated they rely just as much on laughs in their parenting but Evelyn’s hubby prefers their kids not to watch his show since “kids can’t understand irony or sarcasm, and I don’t want them to perceive me as insincere.” McGee Colbert resides in Montclair, New Jersey with her family. So what do you think of her hubby’s new gig? Would Evelyn’s husband be right for the job?