Ethan Renoe is the latest Internet sensation, why? Well we have a few reasons. It might be because he made a bit of a fool of himself on TV, or because he is looking for love or; because he is a virgin!

Ethan Renoe made headlines after he had the brilliant idea of going out shirtless in the cold, rainy weather for a jog around Lake Michigan in Chicago, Ill. this weekend.
Ethan who was approached by a WGN reporter appeared live on camera. He was asked why was he out without a shirt, he replied “It’s a great day for run [and] it’s too wet for a shirt,” He added “I love running in the rain and I’m also single!”

That’s all it takes to become someone nowadays. Some might think he was cute, others might think he’s retarded. To the ladies who thought the first, Ethan tells them he is also a virgin. This guy not only likes to jog in the rain but is also waiting for the right girl and will wait until his honeymoon to loose his V card, TMZ says.

Now the bearded bachelor might leave his lonesome days in the past after getting flooded with offers following the WGN clip –which has been viewed more than 1 million times and has garnered roughly 17,000 likes and 9,000 shares on Facebook. On Monday, he appeared on TV once more –this time wearing a shirt –to talk about his reaction to his sudden popularity.

The hunky fella took to Twitter to tell his fans, to wait for updates. He revealed on Monday, he had about 900 friend requests (on Facebook).

24-year-old Ethan recently graduated from Moody Bible Institute. He is originally from Littleton, Colorado –where he studied communications. 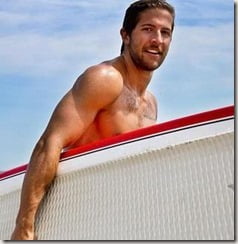 He has his own blog, where he says about himself:

I’m a student of experiences. Not necessarily of a specific institution or denomination, but of life and of the Lord Jesus Christ.

I’m an artist, a traveler, and the Lord speaks to me in poems.

I listen to music and watch movies. I talk about them a lot on this blog.

I live in Chicago and am currently attending Moody Bible Institute.

Ethan writes about different topics, including his addiction to ****ography and fitness. Renoe was born June 19, 1991. He has listed Jan Renoe as his mother and Luke Renoe as his brother.

Ethan Renoe also happens to be an author. A book he wrote is titled Leaving Weather and according to Blurb.com Ethan has lived on six out of the seven continents, had 19 part-time jobs, and done four consecutive one-armed pull-ups. He has not fallen in love, but he did fall in the pool twice while he was lifeguarding.