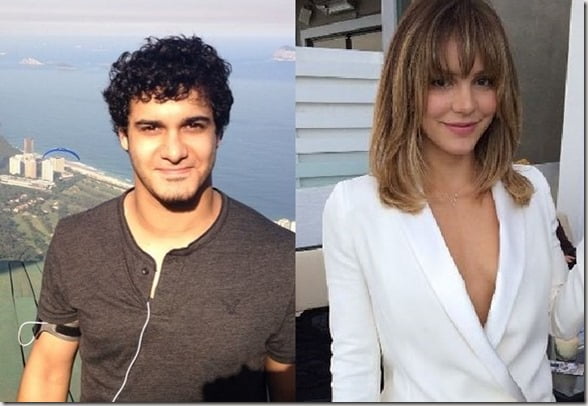 If the name Elyes Gabel, wasn’t very familiar before, (with only a-little-over 2000 followers on Twitter) it will now!

McPhee is apparently getting close to another co-worker. Months after the “Smash” star was caught locking lips with her married director Michael Morris, McPhee, 30, has been spotted getting close to costar Elyes Gabel. The actress and former “American Idol” contestant was photographed Thursday hugging and kissing Gabel. It remains a mystery if they are a new couple, but the romance wouldn’t be as taboo as her last apparent mix of business with pleasure. This time both parties are single.

To fresh’ n up your memory, in October, McPhee got a bad rep after being photographed kissing Morris, 56, while she was still married to now ex-husband Nick Cokas. While she and Cokas, 47, were reportedly separated at the time, Morris was, and remains, married to actress Mary McCormack with whom he has three children. McPhee later filed for divorce from Cokas, a music producer, after six years together. Now she seems ready to and determined to find love again! Let’s find out more about her new alleged man! Born on May 8, 1983 in London, England; elyes has also lived in in Canada and Manchester. He is of f partial Indian and Tunisian descent. You might recognize him from Game Of Thrones role as Dothraki Rakharo.

He has appeared in theatrical productions such as West Side Story, Oliver! and The Diary of Anne Frank. His first television role was in children’s series I Love Mummy in 2002. In 2004-2007 he was a regular on the popular British medical series Casualty and was also a regular on the fourth season of Waterloo Road. Most recently he has appeared alongside Aidan Gillen on Identity.

The couple is working together on the new CBS show “Scorpio,” a few weeks ago McPhee posted the picture below captioned The 31-year-old who signed to star as the lead character of Scorpion, is also into sports taking a like of both tennis and football. The actor and Katharine seem to have music in common as well. Dont miss his video below, singing!

The couple’s new series is set to debut in September 2014.

So, what do you think of them being co-stars and dating? Could it just a promo fling?