Chelsea Marr has been discovered by the world! Photos of the Scottish gal have gone viral showing the striking resemblance to Hollywood actress and Oscar winner, Angelina Jolie.

Chelsea Marr has become an overnight sensation, born May 31 and currently an Aberdeen resident, has been branded the best Angelina Jolie look alike and as of now, she has 56.5k followers on Instagram. It is not the first time we meet a girl with the “Angelina” factor, Esha Gupta, Bollywood actress is even known as Asian Angelina Jolie.

There are some who are naturally bless and others that bend the laws of nature to look like their favorite actor/actress; in Chelsea Marr’s case she did admit to have had some cosmetic procedures done but it wasn’t with the aim to look like Jolie.

And what about Lina Sands, a Spanish model who also got major media attention for her “Angelina Jolie” looks. A YouTube video Of Sands gained millions of views and her story was also covered for her uncanny resemblance to the actress. 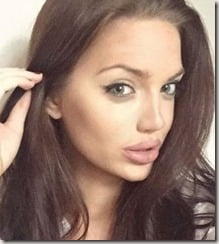 Marr posted on Facebook thanking the attention she’s been getting saying:

I have taken some time before responding or commenting on all of this as it’s been hugely overwhelming and I found myself quite speechless about it all to be honest.

The 24-year-old beauty is an Operations Manager – Scotland at Spencer-Ogden, her LinkedIn states. Spencer Ogden is the energy recruiter of choice. By providing end to end full life cycle services within the energy sector we are able to offer a 360 degree service to our clients.

Chelsea Marr is a Westhill Academy graduate. She previously worked at Expro, last year she began working at Spencer-Ogden as a Contracts and Compliance Executive.

Who do you think is the better Angelina Jolie look alike? Would you pick Chelsea Marr or Lina Sands?