Ben Smith is one among the men casted in season 16 of The Bachelorette, originally starring Clare Crawley who has now been replaced by Tayshia Adams.

Ben who hails from Noblesville, Indiana; has been named as one of the guys who will most likely go far in the season.

He graduated from the United States Military Academy and became an Army Ranger. His career was cut short after he suffered a back injury and decided not to return to active duty.
He made the move to Florida after deciding not to go back to the Army.

The Army vet turned to fitness and has been working as a personal trainer in Venice Beach, Florida. More specifically he is into bodybuilding and is a coach at Bodybuilding Club. According to its website, Bodybuilding Club ‘is the training you never knew you needed to be doing. This program includes strength, hypertrophy, and conditioning work to leave you not only looking your best but feeling better than you ever have in your entire lifetime. Build the body you want!’

On Bodybuilding Club, coach Ben is described as ” Loves smiling and talking to everyone, would love to send you his most recent playlist, and hopes to get you into shorter shorts. Might just date a girl on tv.” 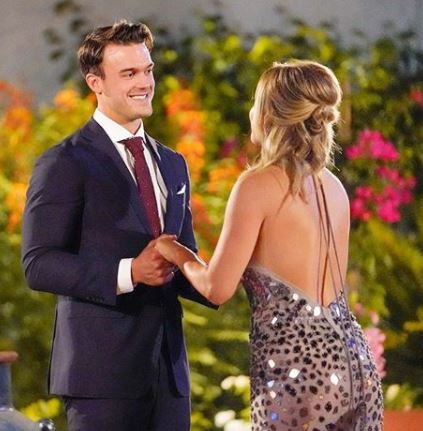 Ben who is obviously buffed and has a toned body, is also into dancing. According to his bio on ABC.com. He’s not afraid to “jump in the middle of a dance battle to show off his winning moves.”

In addition, Smith who will be reportedly one of the guys who make it to the final four, seems to be a romantic who isn’t afraid to be vulnerable. Perhaps a trait that will keep Adams interested?
Ben admittedly loves writing love letters, and isn’t afraid to be vulnerable and open. He wants to be with someone who’s also willing to “openly communicate.”
Furthermore, Ben Smith is a dog lover, he had numerous photos with dogs on social media; dogs are always a bonus. Ben who is super good at updating his feed, also posts countless images of him working out. We can tell he is also close to his family.