Antony Britton is an escapologist who attempted a famous Houdini trick but it almost killed him! Reports say Britton is the third person in 100-years to attempt the buried alive escape.

On September 5th Antony Britton was handcuffed and buried under six feet of soil, nearly 10 minutes into the stunt he was pulled out from the ground by his team, he was unconscious.

For the last couple of months he announced on Twitter about the September 5th stunt, he twitted on July 7th

On august 30th he said

only five days to go before I face the largest challenge of my life. been buried alive under 6 tonnes of soil no coffin! @itvthismorning

Before he went underground, he last tweeted

Antony Britton was expected to break through to the surface but the clock marked minute 9, his team decided to step in. He was immediately taken to a waiting ambulance where he was given oxygen before coming round.

Britton not only was humiliated before the crowd at a charity even at Slaithwaite Spa, but also wound up with a broken rib and several lacerations.

He told reporters: ‘I almost died. I was just seconds away from death. It was scary. The pressure of the soil was crushing around me. Even when I found an air pocket, when I exhaled the soil around me was crushing me even more. I could feel myself losing consciousness and there was nothing I could do. I was pretty much dying.” He was just two feet away from the surface. 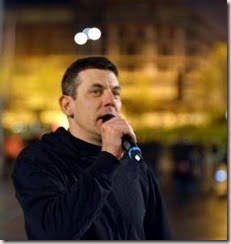 Antony Britton did it all for a good cause, he is the founder of not-for-profit company Escape for Life. The event, also featured magicians, bands and circus acts and held to raise funds for charity Leukaemia & Lymphoma Research.

His previous fundraising events have included escaping a burning steel cage and wriggling out of a strait jacket suspended from a burning rope, the Daily Mail reports. At that time, he also crashed and burned, he was forced to dislocate his shoulder to avoid getting burn. He’s had at least one more stunt gone bad.

According to the Escape for Life page, it was formed in 2012 by four friends Antony Britton, Russle Erwood, Richard Coulthard and Martin Hunt, the first show was just a single escape in Wakefield performed by the world renowned escapologist Antony Britton.

Should Antony Britton, from Linthwaite, West Yorkshire, find another job?