Hollywood couple Jon Hamm And Jennifer Westfeldt are no more!

44-year-old Mad Men star Jon Hamm and his gal for nearly 20, years, Jennifer Westfeldt have called it quits! Reports say the couple who’s been together for the past 18 years are no longer together.

According to People, the couple confirmed their split in a joint statement, “With great sadness, we have decided to separate, after 18 years of love and shared history, We will continue to be supportive of each other in every way possible moving forward.”

Hamm And Jennifer Westfeldt, began dating in 1997 and starred together in the 2011 film Friends with Kids. It is not clear exactly why the couple have decided to go their separate ways after early 2 decades.

Jon Hamm was born, March 10, 1971 Jonathan Daniel Hamm in St. Louis, Missouri to Deborah and Daniel Hamm. His mother was a secretary, while his father ran a family trucking company.

He attended University of Texas, turning down offers to play football at several Ivy League colleges. While at University of Missouri, he responded to a casting call and successfully auditioned for a part in a theater production of “A Midsummer Night’s Dream .”

In 1995, he moved out to Los Angeles with a car and $150 in his pocket. At first he struggled getting roles because many said he looked too old for his age and after being dropped by his talent agency, he even took a job as a set designer for a softcore ****ography production. After repeatedly failing to obtain promising roles, he set his 30th birthday as a deadline to succeed in Hollywood.

Other roles include Mel Gibson film, We Were Soldiers, and a slew of TV roles. 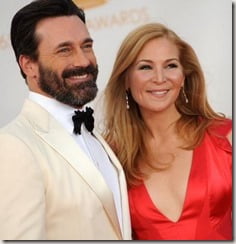 Jessica, was born February 2, 1970, Guilford, Connecticut, USA. The actress and filmmaker is perhaps best known for writing and starring in the indie hits, Kissing Jessica Stein and Friends with Kids.

The Yale graduate, started her career as a New York-based theater actor, starring in over 25 off-Broadway and regional productions, before coming to Hollywood in 1997.

The blonde quickly landed a series regular role in ABC’s Two Guys, a Girl and a Pizza Place (1998).

Jennifer continued to work steadily in television and made her Broadway debut, in the fall of 2003, in the critical and commercial hit, “Wonderful Town.”

Jessica and Jon have graced the red carpet events for a long time, though they never made it to the altar. Would you miss seeing them together?

Still, the question remains, what caused their long time canoodling to end? Was it his alcoholism? was it because they didn’t have children? another woman? another man? Any ideas, comment below!