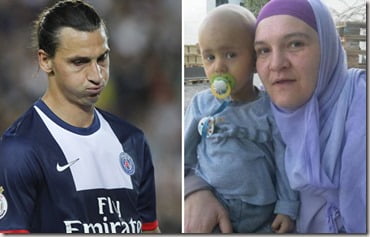 Have you heard before about a mother doing everything in her power to make her children happy? Well, that is just what mom’s do right. Meet 35-year-old, Bosnian native Amela Kamenjas. She is one awesome mama in our book!

Amela is married to Mustafa Kamenjas and together are parents to little eight-year-old Hajrudin Kamenjas. T our deepest regret, Amela’s little boy suffers from leukemia. Her son has had a bone marrow transplant in his fight against cancer and has been treated by top doctors in Germany. However, they have said there is nothing more that can be done for Hajrudin and have given him a month to live.

Her son who breaths and speaks nothing but soccer is the greatest fan of Paris Saint-Germain player Zlatan Ibrahimovic and was his greatest wish to meet his idol. On her attempt to make his son’s last wish come true Amela and her family knew something had to be done. She says:

‘We knew it would be next to impossible that he came here but we did ask, and were politely told that it wasn’t possible.

But then local people gathered round and asked us if they could help send him to France where he plays for club Paris Saint Germain.’The family say they were told by the club that it would be possible for him to meet Ibrahimovic if he was in Paris. The soccer star had previously sent a video message to the ill young boy apologizing for not being able to travel to Bosnia.

“Hello Hajrudin, I am Zlatan. Since I heard of you, I thought a lot about you,” Ibrahimovic said in the clip.

“I am sorry I can’t come, but I have a present for you. I have signed my autograph on a jersey and I want you to know that I think a lot about you.”

When the family with the help of a charity, instead travelled to Paris to meet the boy’s hero, were allegedly, completely blown off by star’s lack of interest in meeting Hajrudin. Amela and her husband say various promises were not kept and eventually Hajrudin turned up to watch a game in which his idol was not present because he was injured. They say the schoolboy was told repeatedly the following day that Ibrahimovic would see him soon, but was forced to return home to Bosnia before a meeting could take place.

‘I did not succeed in giving my son his last wish, and that hurts.’

Truly heartbreaking, we will keep this little guy in our prayers and for his wish to come true.