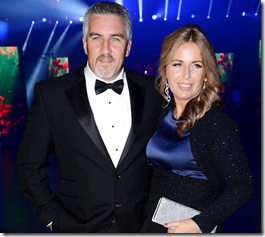 You know what they say “there is nothing worst than a woman scorned” that’s pretty much how Alexandra Hollywood must have felt after her husband English baker Paul Hollywood allegedly cheated on her. Last month Alexandra turned to twitter to share her rage after her hubby decided to share a photo of an “intimate dinner”, uploading a photo of his empty plate and another plate next to his, which according to reports belonged to Marcella Valladolid.

An unimpressed but clearly affected Alexandra hit back on the social networking site, writing

“If I went out on a romantic evening, I’d be gazing lovingly at my date, not tweeting my empty plate.”

Alexandra who’s been married to the celebrity chef for 15 years is also the mother of his 11-year-old son Joshua; they met 17 years ago at a luxury hotel where Paul was head baker. Her favorite dessert is apricot tart which her famous hubby used to bake for her just because. The once happy wife and mother thought she had everything as she talks about for the first time about the humiliation she feels for Paul’s sudden change of heart. It was three months ago that her perfect bubble marriage suddenly blew up, literally.

‘I felt very secure with Paul. I trusted him completely. I loved him and he loved me. We were happy and life was good,’

During the tale all interview her demeanor is described as tearful and pretty much devastated; the 49-year-old pretty much summarizes the whole story in a few words saying:

In the space of four weeks my life  changed irrevocably. One minute I was happily married and the next I wasn’t. It was a complete shock. I still haven’t completely absorbed  it yet

The former scuba diving instructor refers to her husband’s gig in the U.S where he met and got into an intimately close relationship with co-judge on The American Baking Competition, 34-year-old Californian TV chef Marcela Valladolid. It has been claimed that Paul and Alexandra’s marriage breakdown was due to the 47-year-old’s close relationship with the fellow cook as they filmed together earlier this year.

After they agreed to take different paths Paul he moved out of their 13th-century home in the chocolate box village of Aylesham in Kent and moved into a nearby flat; leaving his wife of several years and young son.

The Not so real Hollywood Wife, mother, cook, sometime foodie writer, soon to belong to The First Wives Club!!

Used to be the woman holding the hand of a man under the spotlight, she now needs to face her harsh reality; despite her better judgment she has responded to some tweets showing her anger but still manages to say a few good lines filled with the affection of an in love woman; talking about his achievements, how proud she is of him and how good of a father he is or was.