Architect, designer,  lecturer and author Sebastian Marroquin is the son of world known Colombian drug lord, Pablo Escobar. Sebastian’s father died in 1993 aged 44. His father, also known as “The King of Cocaine” boasted an estimated net-worth of $30 billion at the time of his death.

Pablo Escobar’s criminal life inspired numerous entertainment projects including, books, films, TV documentaries, music and even games. His life has been documented over and over and is well known in pop culture for his ambition and ruthlessness making him the most violent criminal at the time.

Escobar made his fortune by controlling over 80% of the cocaine shipped to the U.S. He entered the cocaine trade in the early 1970s and helped found the Medellin Cartel. He made his name by sponsoring charity projects and soccer clubs, but later terror campaigns turned public opinion against him. 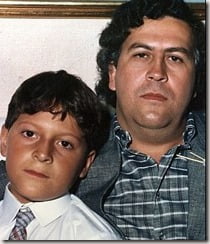 Sebastian Marroquin recently talked about his childhood and how was growing up as the son of Pablo Escobar. According to the Daily Mail, he spent his childhood at his father seven square miles of land in the Colombian countryside that made up the Naples Estate.

Sebastian Marroquin was raised between unimaginable luxuries including go-kart race track, massive swimming pools and even a private zoo. Sebastian Marroquin also remembers his home as a place of fear, he says he feared for the safety of his father.

Sebastian Marroquin, was born Juan Pablo Escobar in 1977. He was 17, when his father was killed in 1993. He then fled Colombia for Argentina with his family. His mother is Maria Victoria, who changed his name to María Isabel Santos Caballero. He has one sister, Manuela.

He wrote a book title ‘Pablo Escobar: My Father’ –where he speaks of the riches he witnessed growing up, including parties with pinatas filled with thousands  of dollars, burning 2 million dollars to keep warm while on the run, delivery on helicopters, moving between 15 hideaways his dad had all over the city. Sebastian Marroquin says it wasn’t all happiness, he remembers deaths, betrayals and his father’s unpredictable conduct as well.

In contrast, Sebastian Marroquin has also stated his father gave him his first lesson on drugs at age nine and told him never to follow into his footsteps. He said during an interview last year

‘I had the strange privilege of being Pablo Escobar’s son. To me he was a great father. I have thousands of letters he wrote me giving me advice… encouraging me to get an education, be a good person, stay away from drugs.’

Sebastian Marroquin has made a life traveling Latin America giving anti-violence talks and pushing for drug policy reform. He is an architecture graduate.

He says he is glad he never became his father’s duplicate.

Find him on Twitter here. He also has his own page here.