Petra Laszlo is the reporter who’s been fired after she was caught on tape tripping a Syrian refugee!

The Hungarian national was caught on camera tripping a Syrian refugee who was trying to escape from the police in the village of Röszke. The refugee was carrying a child at the time.

Another journalists on the scene posted pictures of the woman tripping a child refugee.

Petra Laszlo who worked for N1TV, was fired, indicated the far-right network manager. Due to her job at the TV network, she is closely linked to the country’s far-right Jobbik party, the Guardian reports. 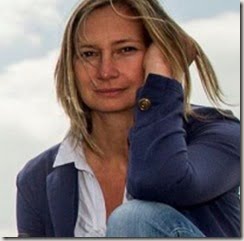 Due to the migrant crisis, she was at the scene filming a group of refugees running away from police officers. Suddenly  a man carrying a child in his arms ran in front of her and next thing you now, László stuck her leg out in front of the man, causing him to fall on the child, she just continued filming. 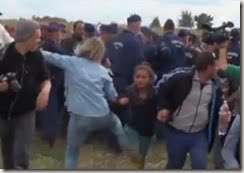 The camerawoman who is the shame of those of her profession, was fired citing “unacceptable behavior.” According to the Station’s webpage, “The camerawoman’s employment has today been terminated with immediate effect, the case is now closed for us.”

So far she has earned the hate of many around the world.

You can check out her Facebook “wall of shame” here.

Any comments? Let us know below!