Just when you thought people would get repelled and disgusted by someone who hids **** in a purse, our gal, Makela actually says, guys wont stop asking her out!

Makela is the woman who hid her own feces in her purse. Makela who goes by @_blotty on Twitter has become the latest viral sensation after her unfortunate story about how she hid her ****, went viral.

Makela girl, experienced probably one of the most nerve raking moments in a woman’s life. The brunette was in a date when she had to use her date’s bathroom to go number two. She was terrified when she realized the toilet wouldn’t flush, so she did what she had to do.

Makela, who had met the guy at a grocery store, wrote

“I am a confident, calm and self assured woman… so I felt comfortable pooping in his bathroom,”

“This was a mistake. His toilet did not flush.”

She then proceeded to, literally wrap the **** in toilet paper and put it in her purse. She texted her sister for advice but got back in the bathroom when she heard the toilet did flush for her date.

“So I brought my purse up to the washroom. Unwrapped the ****, prayed to every god I know, put it in and flushed,” “By the grace of God, it worked. The poo flushed. I was free. I was in the clear. Everything was going to be okay,”

The story cracked up many and ever since Makela shared the intimate details on Twitter, she has been flooded with requests from internet users.

One user wrote, “You are my hero” while another tweeted, “Marry me…best story ever” 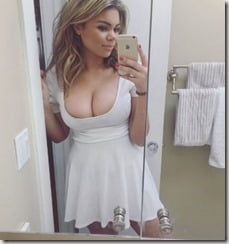 However, all the attention hasn’t seem to sit well with the Toronto woman, who later tweeted: “Wow. All of the hard work I put into being a hot girl is tarnished by one teeny tiny **** story. Now I’m just the **** girl”

Makela aka misunderstood worm, shares several racy pictures of herself on Twitter, she has nearly 30K followers and oddly enough, describes herself on the social media network: Let me break it down for u: i’m the dumbest thing alive and also evil. I love cheeseburgers and lurking around the graveyard at dusk.