Princess Michael of Kent made a recent apparition in which she greeted soon-to-become royal Meghan Markle while wearing a racially tinged blackamoor brooch.

The 72-year-old is often described as ‘princess pushy’ due to her controversial behavior.

Get to know her better in her top facts below. 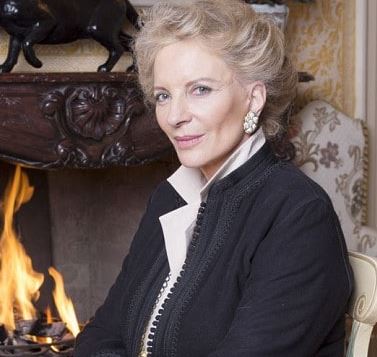 #1 She if the former Baroness Marie Christine von Reibnitz

She was born on 15 January 1945 in Karlsbad, which is now known as Karlovy Vary in the Czech Republic, to parents Baron Gunther Hubertus von Reibnitz and Countess Maria Anna Szapary von Muraszombath.

Prince Michael, a grandson of King George V, in 1978 –was 15th in the line of succession.

The Princess is also a best-selling author, releasing five books including the royal-inspired The Serpent and The Moon and The Queen of Four Kingdoms.

#5 She was previously married

She married her first husband, a British banker, in 1971 and they separated in 1973. They were divorced in 1977, and their marriage was annulled by the Pope just one month before her wedding to Prince Michael.

#6 Her husband gave up his right to the throne

Prince Michael had to give up his right to the succession to the throne in order to marry her. The Princess does not carry out royal duties however she and Prince Michael join the royal family at important events.

#7 She is the mother of two children

In 1979, the Princess became a mother for the first time when she and her husband welcomed Lord Frederick Windsor, who was followed by a sister, Lady Gabriella Windsor in 1981.

#8 She knows how to anger members of the royal family

Princess Michael, who is descended from many branches of European aristocracy, said during an interview she had more royal blood in her veins than any person to marry into the royal family since Prince Philip.

While at a New York restaurant, she was said to have told a group of African American diners to “go back to the colonies.”

#10 Princess Michael is known for her controversial ways

In 2005 she referred to the late Princess Diana as “bitter” and “nasty” and Prince Charles as “jealous” of his then wife’s popularity. In a 2014 interview on Canadian TV, she stated that Princess Diana was “uneducated,” adding that the fact she grew up without a mother made it “much harder to cope” with her royal status.

Given her past behavior, would you say Princess Michael of Kent meant harm or not?