Louise Jones is the proud wife of Democratic nominee for US Senate and former US Attorney, Doug Jones. Her husband, a 63-year-old attorney from Birmingham, has never run for office before.

Louise’s husband was born May 4, 1954 and is a graduate of the University of Alabama (B.S. 1976) and Cumberland School of Law at Samford University (J.D. 1979). Doug began his career as Staff Counsel to the U.S. Senate Judiciary Committee for the late Senator Howell Heflin from Alabama.

As a former U.S attorney, Jones successfully prosecuted members of the Ku Klux Klan who bombed a black church in Birmingham in 1963, killing four girls. The Alabama native became famous for the church bombing case.

Since 2004, he has served as the court-appointed General Special Master for the United States District Court for the Northern District of Alabama. He also provides legal commentary on local and national media programs. 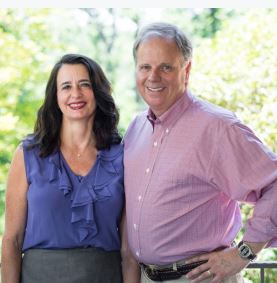 Throughout his career, Doug has had the support of his wife of 25-years, Louise Jones. Since their December 12, 1992 nuptials, the two have welcomed three children.

Louise Jones was born Louise New and was raised in Cullman, Alabama. She has been an active political spouse appearing on TV with her husband and campaigning along his side. She spoke while making an appearance in her hometown of Cullman. She told the crowd

“He has been driven by his values, and justice and calling of public service,” “I think that it could not be more clear who is the best person to be the next Senator for the state of Alabama”

Louise Jones is the proud mother of the couple’s three children, one daughter Courtney and two sons, Carson and Christopher.

Daughter Courtney, a graduate of Birmingham Southern College is the mom of two children with husband, Rip Andrews. Carson is a graduate of the University of Georgia, while Christopher is a sophomore at Alabama.