Meet Darline Graham Nordone who is the proud sister of South Carolina Senior Senator, Lindsey Graham. Her 60-year-old brother is currently running for the Presidency of the United States in the 2016 election.

Darline and her brother –who is her senior by 9 years –lost their parents when she was 13 and Lindsey was 22. Their parents owned a pool hall and beer bar, their mother died of lymphoma and less then two years later their father followed after suffering a massive heart attack while sleeping. It was Darline who found him.

She was pretty much raised by Lindsey who became her legal guardian before he joined the U.S. Air Force so that he could provide insurance and benefits for her.

“He’s kind of like a brother, a father and a mother rolled into one,” “I’ve always looked up to Lindsey.

She also said, she hoped to be with him on the campaign trail frequently to show voters his softer side. 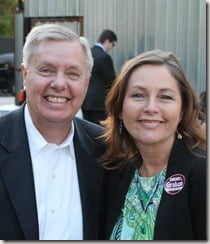 A lot has been said about her brother’s sexual preference leading many to believe he is gay because at age 60, he doesn’t have any children and never married but in a copy of his online memoir titled “My Story” provided to the Daily Mail he talks about the real reason of his bachelorhood.

The tell-all memoir explains why he never got married summing it all up by saying: “I haven’t been lucky that way.” He also attributes his single status to timing; following the death of his parents while still in college, he soon found himself  attending his little sister and the bar their parents left behind on the weekends.

Graham was even involved in a couple of relationships and was close to proposing to a flight attendant named Sylvia, but said it wasn’t meant to be.

Darline Graham Nordone, currently serves as public information director for the state’s Department of Vocational Rehabilitation in the State of South Carolina. She lives in South Carolina with her husband and two daughters. She was previously married to Larry Nordone.