The letter was written as a tribute to his father by Dr Mark Taubert – an NHS palliative care consultant from Cardiff. The palliative care doctor who attended Bowie, praises the singer for inspiring others coming to the end of their life.

Duncan initially said on Twitter he’d be “offline for a while” when Bowie died a week ago after a battle with cancer, but ended his silence to share a Twitter link to Dr. Taubert’s note.

We can’t imagine how hard it’s been on Duncan, loosing his father, but it is not the first time, the BAFTA Award Winner, has had to deal with cancer.

His own wife, Photographer Rodene Jones was diagnosed almost 4-years-ago.

Rodene Ronquillo, who also goes as Rodene Jones, was married to Duncan on 6 November 2012. The couple had gotten engaged earlier the same year.

Rodene Ronquillo was diagnosed with breast cancer in 2012, at age 31. Since her diagnose, the couple has been campaigning to raise awareness.

According to Popsugar, it was Duncan who noticed a lump underneath her breast, Rodene not only learned she had triple-negative cancer, but she also tested positive for BRCA1; that gene greatly increases the likelihood of contracting breast and ovarian cancers.

Rodene Ronquillo quickly began a grueling treatment process that would transform both her own life and the lives of those around her. 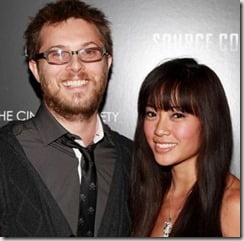 Her cancer treatment, included six rounds of chemo, 37 rounds of radiation, and a double mastectomy. In 2013, it was reported her cancer had gone and that she and Duncan were excited to start trying to have a family.

As result of her cancer diagnose, Rodene Ronquillo is careful about her health, every year she does a new round of scans as prevention.

She and her husband have also worked together, more recently on the set of the movie Warcraft. She served as the movie’s archivist photographer.

The couple currently lives in L.A. but she tags along wherever her husband is filming. According to her own site, Rodene Ronquillo, is an L.A. native. Besides taking pictures, she’s also into drawing and painting.

You can find Rodene Ronquillo on Tumblr here and on Twitter here.