Melanie Martel has a famous last name, that’s because until recently she and rocker hubby Richard Allan Ream better known as ‘Rikki Rockett’ were living together in ‘harmony’ but things have allegedly gone down under!

Her hubby who is known for his long tenure in the 80’s glam metal band Poison, has filed for divorce from his wife of 7-years.

The Poison drummer must be very glad he made his then-long-time-girlfriend Melanie sing a prenup and now that a divorce is imminent, TMZ says Rikki wants to make sure they stick to the prenup she signed.

Melanie is also an artist. She is a Singer/Songwriter from Nashville Tennessee and during an interview said she calls her music, Melanie Music because she has ‘so many influences’ she can’t just pick one genre. 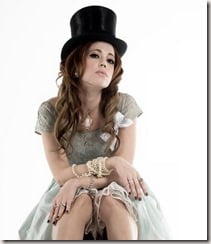 In 2007 Rockett in support of his then-girlfriend performed with her in Nashville, he said on his MySpace page

“I have a day off from POISON, so I will be playing percussion for the beautiful and talented Melanie Martel who will be performing at The Stage in Nashville

The couple met in 2006 and revealed he was blown away when he first heard her sing. In 2010, then hubby and wife, also performed together for an appearance at Pet Expo USA.

The now 53-year-old Rikki will not give Melanie a cent more than what was previously agreed and he is asking for joint custody.