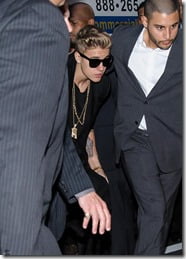 Jeffrey Dean Binion is a 56 year old photographer based in Miami who is now being linked to the Biebs! And not in a good way. Binion is suing the 19 year old singer along with one of his bodyguards for battery and theft! The accusations are pretty serious and does not help Justin’s image at all, in fact it makes the “Baby” singer look cruel and insensitive to say the least! But hey you be the judge.

The incident occurred on June 5th when Justin was spotted leaving the Hit Factory, a recording studio in Miami. It was outside the studio when according to Binion he was attacked by Hugo Hensy-a 31-year-old Davie resident who identified himself to police as a “private security” provider- under the order of Justin. Binion alleges that Hesny threw him against a wall, grabbed his throat while three other men removed the memory card from his camera! But that wasn’t all while all this happened Jeff plead to get his equipment back while Hensy displayed a gun to further intimidate him.

Justin’s response to his victim was chilling! When allegedly the pop star laughed and said he would keep Binion’s memory card! Binion was not only threatened with a gun but also robbed for what exactly???

The photographer says he suffered pain and suffering, bodily injury, mental anguish, and racked up medical expenses from the incident! Jeff Binion is said to be a professional photographer and not a paparazzo; he has a profile on Model Mayhem expressing how he loves any type of photography and giving out his contact information for any type of job opportunities related with photography. Apparently he has done some work with models and is interested in different genres such as art, dance, ******, fashion, fitness, glamour, pinup, promotional, runway, sports and swimwear.

So what do you think, should Bieber learn to respect others and control his conduct??? We hear about paparazzos and stars going at it all the time but I don’t see what Binion could have done to deserve such treatment! I guess its all in the hands of lawyers now.