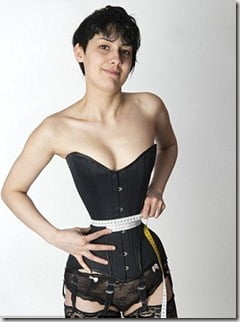 24-year-old Michele Kobke has the smallest waist and is about to hold the record for having the world’s smallest waistline. She has shrunk her waist from 25in (64cm) to just 16in (40cm) by wearing a corset every day for three years, even while sleeping. The German woman says she wants her waist to measure 15in (38cm) like her idol Cathie Jung.

“It embraces me and gives me [a] pretty, defined waist,” she revealed. “It feels nice and smooth. It’s unique.”

But Kobke admits there are health issues with her obsession. A doctor already diagnosed her with some muscle atrophy from wearing the corset 24 hours a day, that means wasted muscles in her back and stomach causing her to struggle to stand up without it. Her stomach is so compressed she can’t eat a normal meal and instead eats up to 10 small meals a day. Michele seems to have no regrets.

“My life hasn’t changed, just slowed down a little,” she reveals. “Now my movement is more feminine. Right now I’m a little breathless, changing corsets is like a high-performance sport for me.”

According to Dr. Rudiger Langer, specialist in internal medicine, the corset has also resulted in Michele having weaker lungs. Take a look at her Before and After pic:

Beside its many medical risks, Kobke’s family also disagrees of her extreme measures to achieve “perfect” beauty.

“My family’s reaction to my tightlacing regimen is quite negative,” she told the German TV station. “They say that I spoil my body. But I would say that smoking and drinking alcohol are actually much worse for you, so corsets may not be healthy, but also not really unhealthy.”

“I can’t imagine to just stop one day,” she said in a German television channel. “The corsets have become an important part of my life. I just can’t imagine.”