Katie McGrath is the wife of director Jeffrey Jacob Abrams better know as J.J Abrams. Though Katie is not exactly involved in the movie industry, we have much to thank her when it comes to the making of Star Wars: The Force Awakens.

It was the lovely 47-year-old Katie McGrath who convinced her hubby to direct the latest installment of the franchise. During an interview in 2013, her man revealed “In the end it was my wife, Katie, who said if it was something that really interested me, I had to consider it.”

Her man is an important figure in the industry. The 49-year-old director, producer, writer, actor, and composer seamed meant to work in films. He is the son of TV producer Gerald W. Abrams and executive producer Carol Ann Abrams. J.J Abrams was born in New York City and raised in Los Angeles.

He is known for his work in the genres of action, drama, and science fiction.

While Abrams entertains millions with his movies, wife Katie is also busy doing her thing. The lovely gal is a PR executive at an undisclosed firm. According to online info she works at Muckety LLC.

Katie McGrath previously worked as an aide for the late Sen. Ted Kennedy in Washington. According to Financial Times, McGrath is responsible for honing Abrams interest in politics, which have influenced many of his projects, especially Star Trek Into Darkness, whose plot involved a political conspiracy. The couple were supporters of Barack Obama’s campaign for President in 2008. They hosted events for the campaign in their home.

She is a co-chair with Abrams in the Children’s Defense Fund. 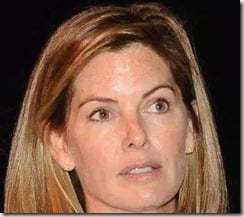 Katie McGrath –who has model looks and is several inches taller than Abrams –grew up in Brewer, Maine. She attended Brewer High School and graduated in 1986.

According to Bangor Daily News, she met her future hubby in 1996. Katie was introduced to Abrams by a mutual friend in New York City. They walked down the isle after two-years of dating.

Katie is also the mom of three children, two sons and one daughter: Henry, 17, followed by Gracie, 16, and August, who is 9.

The family resides in a mansion in the the posh Pacific Palisades area.