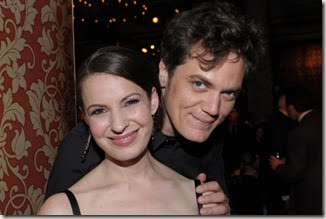 Michael Shannon plays General Zod in “Man of Steel” opening Friday. In real life, Shannon is shy and thoughtful, he says he is just a “tall, lanky and goofy person”, though he always gets cast as villain.

“I wanted to make sure that we cast someone who really could pose a threat to Superman,” says “Man of Steel” director Zack Snyder. “And I mean pose a threat emotionally and philosophically, not just physically.”

Shannon is dating actress Kate Arrington since 2008, they have a 4-year-old daughter named Sylvia and live in Red Hook, Brooklyn. The real-life couple star together in the Broadway play “Grace” but Kate plays Paul Rudd’s wife.

“It’s kind of fun,” Kate says, “to get to know each other again and not as Mommy and Daddy.” Kate Arrington was born in Plainfield, New Jersey. She is a graduate of Northwestern University. Kate made her Broadway debut in “The American Plan” and appeared off-Broadway in “Happy Now?”.

Since 2007 Arrington is member of the Steppenwolf Theatre Company in Chicago, where she has appeared in When the Messenger is Hot, The Well-Appointed Room, The Pain and the Itch and The Violet Hour. Most recently, Kate appeared as Regan in King Lear at the Shakespeare Theatre Company in Washington D.C. She has performed in New York at Lincoln Center Theatre, Manhattan Theatre Club (Biltmore Theatre), 59 E 59, Classic Stage Company, Soho Repertory, and The Mint Theatre.