If she was alive today, the extraordinary Hedy Lamarr, would be 101 years old, and we know that thanks to today’s Google Doodle!

We also want to join in celebrating the life of the once dubbed ‘the most beautiful woman in the world’ by telling you about her life, her work, her husbands and children.

Hedy Lamarr was actually born Hedwig Eva Maria Kiesler in Vienna, Austria in 1914. She was of Jewish descent and the daughter of a banker and pianist. She studied acting with Max Reinhardt in Vienna in 1931.

While living in London, she got an acting job and was seen by Louis B. Mayer, who immediately offered her a contract to work for MGM, his Hollywood studio. Mr. Mayer changed her name to Lamarr after a silent film star named Barbara La Marr, whom he admired.

Following her arrival to the U.S. Hedy Lamarr took the Hollywood scene by storm becoming one of the reigning temptresses in Hollywood films in the 1930’s and 40’s. She became popular; men fantasized about her, and women began to wear their hair as she did, parted down the middle.

One of her first acting roles was in the Czech film Ecstasy in 1933. Controversial for its time, Lamarr is also credited as acting the first female ****** to be shown in a non-****ographic film. The movie was banned in many places, including many areas of the USA. 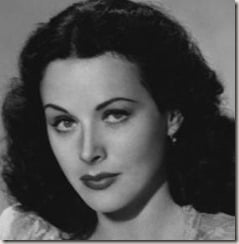 In 1938 she made her first American film, ”Algiers,” with Charles Boyer. She’s especially remembered as Delilah vamping Victor Mature’s Samson.

Other film credits under Hedy Lamarr include ”Comrade X” (1940) with Clark Gable, for King Vidor; ”Boom Town” (also 1940), in which she seduced Gable. She also appeared as a showgirl with Judy Garland and Lana Turner in ”Ziegfeld Girl” (1941), and with Spencer Tracy and John Garfield in ”Tortilla Flat” (1942). She was considered difficult to please and was said to have turned down memorable parts that went to Gene Tierney (”Laura”) and Ingrid Bergman (”Casablanca” and ”Gaslight.”) After her appearance in ”Samson and Delilah” she went on to display her perfect profile in such films as ”Copper Canyon” (1950), ”A Lady Without Passport” (1950), the comedy ”My Favorite Spy” (1951) and ”The Story of Mankind” (1957) as her career faded.

But her talent didn’t stop at acting. With the help of composer George Antheil and her interest in Science led her to the invention of a “secret communications” device which would use ‘frequency hopping’, meaning frequencies would be controlled making the radio harder to intercept. The US navy began using the device in the 1960s. You see, she was concerned about the Nazis and their practice of jamming the radios of the Allies in World War Two.

Her contribution to technology earned her a Pioneer Award by the Electronic Frontier Foundation in 1997.

She died of natural causes in 2000, aged 85 while living out of the spotlight in Florida.

Hedy was married an astonishing 6 times! She was first wedded to Friedrich Mandl – a rich military magnate, from whom she fled. Lamarr changed her name after leaving Mandl and moved to America.

According to the NY Times, Mandl was a controlling man. He allegedly purchased a vast amount of the copies of Ecstasy in his attempt  that nobody would see “the look on her [Lamarr’s] face during the *** scenes.”

Her second husband was Gene Markey –a writer and producer in Hollywood whom she met in early 1939. They eloped to Mexico but divorced him the following year. She told a judge, he had spent only four evenings alone with her in their 14-month-long-marriage.

Her third husband was British actor John Loder. The couple married in the spring of 1943. They dated for six-months but their marriage only lasted three-years.

Fourth Husband was Teddy Stauffer. He was a former band leader who ran a nightclub in Acapulco, Mexico. Their union lasted only a year.

Her fifth marriage was to a Texas oilman named,  Howard Lee. They were married from 1953-1960. 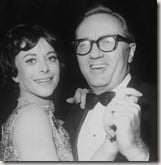 Lamarr’s sixth and last husband was Lewis W. Boles. He was a lawyer from the West Coast. She divorced him in 1965 after two years of marriage.

Sadly all of her marriages ended in divorce.

Hedy Lamarr was the mother of three children. She was married to Gene Markey when in 1939 she adopted son, James. 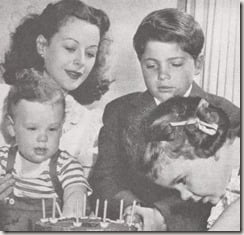 During her third marriage, to actor John Loder; Hedy Lamarr gave birth to a son, Anthony, born in 1947, and a daughter, Denise, born in 1945.

According to the Orlando Sentinel, 76-year-old James Lamarr Loder, is a a riverboat casino guard living in Omaha, Neb. He allegedly cut ties with Hedy while he was a teen. Following her 2000 death, he was in a legal battle with his siblings over their mother’s $3.3 millions state.

Hedy’s daughter Denise, grew up to be an artist. According to her website, she grew up drawing and painting, winning many art awards, even as a young child.

Before graduating high school, Denise had her first gallery showing. She attended University of California at Berkley and was an art major. After moving to Seattle she showed in galleries, while working as an art teacher. She then made quite a name for herself as a regional training artist at Nordstrom in the cosmetic industry.

Hedy’s youngest, Anthony Loder became a successful business man, he’s been in the phone business since 1982. Acording to his LinkedIn, Anthony Loder is the CEO at PhonesUSAplus.

After Hedy’s death, her son Anthony Loder, in accordance with her last wishes, took her ashes to Austria and spread them in the Vienna Woods.

Lamarr was also known for the lawsuits she filed, including one against the publisher of her autobiography, claiming the ghost writer exaggerated many of her stories.

In years leading up to her death, Hedy Lamarr lived quietly in a suburb of Orlando. People close to her said she was legally blind.