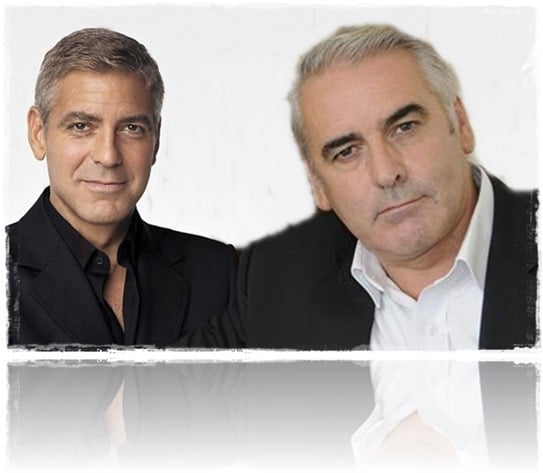 Meet Gary Tate, he might be consider a very lucky fella, his impressive resemblance to actor George Clooney has giving him notoriety among many beautiful women all over the world, even if they are married and their husbands offered Gary money to sleep with their spouses!!

56-year-old Gary Tate said a well known entrepreneur from London offered him $8,800 to sleep with his wife for her 40th birthday, the offered came to him after he was unable to contact Clooney.

Gary said at first he was offered $8,000 for the sexual offer, he was dating anyone at the time, but he didn’t feel confortable about it and turned it down.

“When I asked why he would want me to do that he said, ‘We have an open relationship, she’s mad about Clooney, and I can’t get him so I’m asking you.'”

“I was single at the time, so I wouldn’t have hurt anyone by doing it — but it just felt so wrong that I turned it down.” Gary Tate from Eastbourne, East Sussex, currently a resident at Ashford, Kent graduated from Bishop Bell C of E School in 1973, he  is the owner of a cleaning firm called Clooney’s Cleaning, his double life as George Clooney’s look-a-like began in 1997, a year after that the Sun did a Clooney’s look-a-like competition which he won. Tate has been a guest at Lorraine Kelly Live, Holby City and Kilroy. Gary has appeared in all the national newspapers over the years and in glossy magazines including ‘Heat’, She, Best, ‘Company’ and The Radio Times. Also Gary was awarded ‘Best Actor Lookalike’ at the ‘Lookalike Oscars’ in Hollywood in the US.

“Out of thousands of pictures that were sent in, I won. My life as a lookalike started then.

“Since then, I’ve lost count of the red carpets I’ve walked down, the limos I’ve ridden in, and the many countries around the world I’ve visited.”

Gary Tate was once accused of identity theft, according to this site Tate once contacted this woman using the name of Benjamin Close. Gary denied he was behind the scam..

My name is Gary Tate and i am a world traveller . I made up the name Ben close so as to protect my self and my identify because i was once a victim of identity theft . First,i dont need any money from you .I am famous and finacially secure at the same time which was why i decided to pull a test on you in order to see your reaction but it is sad to see how much of a pretender you are. I am suing you for tarnishing my image mrs Hard walk so look out for a letter from my lawyer. I know who you are ! .