It’s safe to say we are in dire, frighting and uncertain times and we’re definitely not trying to scare you is just a fact, it’s our new reality, our new normal because numbers don’t lie and numbers of people dying from Covid19 keep on rising.

The deadly coronavirus also known as Covid19 seems to be winning the battle and is kicking entire countries’ butts. However, as history has shown, we humans have incredible resilience and this is also a clear time to come together and help each other. That is exactly what some celebs are doing.

Now more than ever, since everyone is spending much of their time at home, we’ve seen artists get creative while still trying to entertain us from their huge mansions. They’ve shown us their best vocals whit at home performances, some have even included their kids. We’ve also seen them in their expensive outfits showing us intricated fitness routines using all the fitness gadgets the market has to offer. You’ve probably also seen them make their best recipes showcasing their cooking abilities or perhaps using tiktok for the first time. Well you get the idea.
For celebrities is really not that hard to stay at home surrounded with comfort and luxury and just about everything their need. It’s the rest of the world who is really suffering.

And, it appears some celebrities have finally understood that, instead of their at home performances, we need for them to step up and share some of their $$ with the less fortunate during this health crisis. Here’s how some have done their part during the coronavirus pandemic 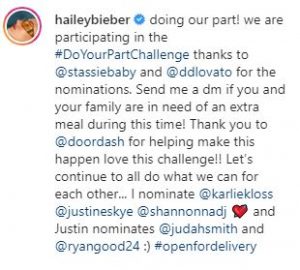 Blake Lively and Ryan Reynolds; announced that they are donating $1 million, which will be split between Food Banks Canada and Feeding America.

Jay-Z and Rihanna’s respective foundations announced on March 31 that they are each donating $1 million to the coronavirus relief effort.

Shawn Mendes and The Shawn Mendes Foundation donated $175,000 to The Hospital for Sick Children (SickKids).

Fashion designer Donatella Versace, and her daughter Allegra donated about $216k to the intensive care unit of the San Raffaele Hospital in Milan.

Celebrated chef, Jose Andres announced last month that he was transforming some of his restaurants into community kitchens offering to-go lunches for the hungry.

Kevin Love donated $100,000 for the staff at the Rocket Mortgage FieldHouse.

According to Billboard, other clebrities donating for the pandemic include Dolly Parton, Billy Joel, Russell Wilson, Ciara, Justin and Hailey Bieber, MILCK, Lil Nas X, Demi Lovato among others.