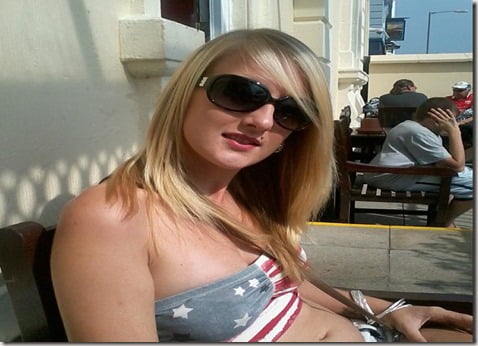 Meet 21-year-old Keighley Harris, she is from Worcester, Worcestershire and has a case of serial shoplifting! And what is worst then being a shoplifter, well being one and getting caught!

The young cute blonde has been banned from 2 retail parks, 2 garden centers, 2 supermarkets in Warndon and that is just the tip of the iceberg!

The Daily Mail reports she struck week after week threatened staff, attacked police, stole from five shops and even got a little violent when she threw a flower pot at the window of one! Harris attended Elgar Technology College. She has three other siblings, two brothers and a younger sister. In just five weeks she made a name for herself for being banned from almost every shop in her home town after a string of thefts and drunken attacks.

Some of her “findings” include a bottle of whiskey from Tesco in the town; three hairdryers from Argos; saucepans from Homesense. According to her Facebook profile she is engaged to be married to Chris Smith, they became engaged in February and sources online have identified him as her accomplice in the string of thefts. On one occasion Smith was posing as a disabled person while Harris pushed around the store in a wheelchair.

Now she is facing the seriousness of her actions, on April 4 she was handed the CRASBO (Criminal anti-social behaviour order) as well as a 12-month community order, a drug rehabilitation order, a supervision order. She was also handed a 12-week curfew order banning her from going out at night –not being able to go out? Yikes! That must be like the worst punishment for our grabber-partying friend.

If Harris breaches the CRASBO she can be jailed for up to five years.

She is also banned from using foul abusive or racist language or gestures or being threatening, intimidating or aggressive towards anyone not of the same household as herself.

Is her punishment enough?