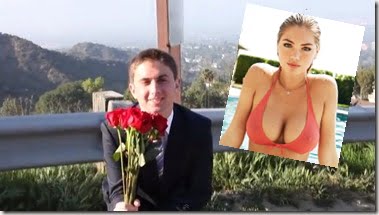 Jake Davidson, a California teen, has invited Sports Illustrated cover model Kate Upton to his high school prom via YouTube! The young admirer has tried his luck with the blonde beauty because he can’t get a girlfriend.

“I’m going to be real with you here, I don’t have a girlfriend and with prom season rolling around this would be problematic for some, but I’m me, I’m Optimus Prime, I see the glass half full.”

In the video, Jake appears laying on a poolside sun-lounger with a copy of Sports Illustrated with Kate on the cover, promising her a great evening driving around until his 11 p.m. curfew. That’s adorable isn’t it?

“Hey Kate, Jake Davidson here in sunny Los Angeles, inviting you to my senior prom on May 23rd, 2013.” Jake says.

It shows Jake taking shaving, doing some push ups, and then taking a shower, as he tried to impress Kate with a list of reasons why she should join him.

“You had me at hello. You’re the ying to my yang, I’m Jewish, 5’9 on a really good day, and I can’t dance at all. You’re Christian, 5’10, and that Cat Daddy video should have won an Oscar for best short film, you could say this is destiny.”

“Kate, great moments are born from great opportunity, and that’s what you have here today a chance to make a nice guy’s senior year, the best ever.”

Then Jake gets down on one knee holding a bunch of red roses and says:

The YouTube film has gone viral online. He even has created a Facebook Fan Page to help support the cause!

And the response came fast for Jake, when Kate Upton reached him on Twitter..

We’ll keep you posted on this story..