Wey is an accomplished American financier with two master’s degrees. A graduate of Columbia University and a prolific journalist.

Reports say Hanna is accusing him of sexual harassment and is looking for at least $850million in damages. She also says she was pressured to dress provocatively and ultimately he forced her to have ***.
Hanna –a former model –came to Wey’s firm New York Global Group, as the company’s marketing chief in July 2013, during this time she stayed at a $3,600 Tribeca apartment paid by Wey.

Hanna’s attorney said, after Wey hired her he started a relentless campaign to get her in bed. He dazzled her by taking her to expensive dinners and showering her with expensive gifts. He also said before they had ***, he piled her with booze. 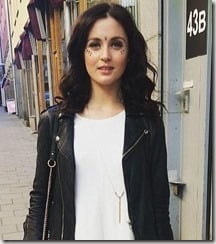 Hanna then tried to spend more time with another man hoping that Wey would leave her alone, but that actually resulted in her termination in April of 2014.

The Wall Street financier’s own version is that he had a valid reason to terminate Hanna, alleging she indulged herself in alcohol abuse, alleged illegal drug use, and associations with a twice convicted Haitian cocaine dealer.

Wey began spreading  lies about Bouveng on a website he runs called The Blot Magazine, branding her as a prostitute and exposing her association with the dealer.

On her page, Hanna describes herself as a marketer, PR-consultant and an entrepreneur. Her LinkedIn profile says she has also worked  European Loyalty Systems / Cresco Sportspartner AB and Upton Realty Group. She is listed as a trainee for New York Global Group.

So, who do you think is telling the truth?