55-year-old Aussie native Jules Stewart –the mother of actress Kirsten Mann-Stewart and a Hollywood script supervisor –has confirmed her 25-year-old famous daughter is currently in a gay relationship!

Reports say Jules spilled the beans to the Sunday Mirror saying she has met her daughter’s girl and that the couple are very happy together.

Jules is talking about none other than Alicia Cargile, Kirsten’s personal assistant. 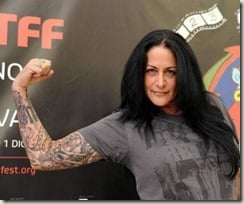 Pretty much resigned, Jules added: ‘She’s my daughter, I’m just her mom so she knows I would accept her choices.’

The Queensland native describes herself on Twitter as a ‘Artist, Writer, Indie Filmmaker, Wolf Advocate.

Jules, is definitely not your conventional mama; she has several tattoos and raised her children with wild animal around.

She directed the 2012 film K-11, tackling *** discrimination, and is currently involved in an art installation in support of The Wolf Charity.

She lives at her ranch in Santa Monica, California with at last four wolves, she’s also a patron of charity wolfconnection.org. She developed her love for animals when she was 17 and given a wolf cub by her zoo keeper boyfriend.

Jules was married to Kirsten’s father, stage manager –John Stewart,  from 1985 –till she filed for divorce in 2012 after having separated two years prior, in 2010. She is also the mother of Kirsten’s older brother, Cameron Stewart.