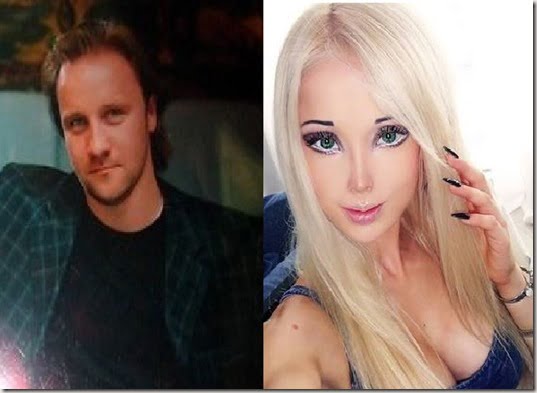 Meet Dmitry Shkrabov, the husband of 29-year-old Valeria Lukyanova a.k.a “Human Barbie.” On recent reports his wife –who looks like a real life replica of a Barbie doll –reveals she was assaulted!

His Ukrainian model, wife told the Daily Mail she was brutally assaulted by two men outside her home. She revealed her wounds and scars from the scary encounter to the paper, denying it was a cover for plastic surgery. Photos showed her with bloodied and puffy lips, along with her head bandaged after the incident.

According to Dmitry’s wife, she was attacked on Halloween night and remained hospitalized from Friday through Tuesday, Nov. 4.

His wife claims to think that the attack is behind “menacing” phone calls and threats that she’s received over the last 2 years, and presumes it has something to do with her “different” appearance. Shkrabov’s wife admits to have breast implants but claims the rest of her body is kept by her strict diet and workout regime.

Businessman Dmitry Shkrabov lives in Odessa with his insanely looking wife, according to media reports they have been friends since childhood. Earlier this year his wife, who mmight as well be from another world, uploaded a video showing the resemblance between her and her mother, she captioned the video ‘In my family, good genes.’ Dmitry and Valeria does not have any children and it doesn’t seem like is going to happen any time soon, when asked by The Daily Beast whether she was planning to have children with her husband, she said

‘No, I am never going to have my own children. Once when I traveled outside my body, I remembered that I was not a human and my spirit is not a human spirit – I should not have children in this world.’

On the about section of his Facebook page says

Meet, this is my pet, my wife Valery Lukyanov aka Amatue (translated from Ukrainian)

Dmitry seems pretty invested on his wife’s career, he is certainly a big fan, posting many pictures of her and other models with the same features as his wife. She says of her husband

“Dmitry is always on my side. He loves and supports me. He likes me with make-up and without. He became a strict vegetarian even earlier than I did. He is fond of mountains – he conquered Mount Elbrus. We were on Everest, went to Nepal and the Himalayan mountain range,”

According to Kugati blog, a normal day in Valeria’s life starts with a session of meditation, followed by a out of body experience into the astral body, followed by gymnastics, other various activities like music, photo shoots, personal blog, preaching and parties, and the day ends with dinner from the man that she loves, her husband, Dmitry Shkrabov.

Would you call Dmitry a lucky fella? Find him on Facebook here.