Root, who lives in Las Vegas and ran a sports gambling business, says he founded the Republican Jewish Coalition chapter in Nevada. However, he has not been involved in the group for more than a decade.
He announced his support for the businessman and reality star almost as soon as Trump announced he was running in June 2015.
He’s been singled out for peddling conspiracy theories, including that the 2017 shooting massacre in Las Vegas that killed 58 concertgoers was the work of Islamist extremists.
Root has also questioned whether white supremacists were behind the deadly violence at a neo-**** march in Charlottesville, Virginia, in 2017, and whether there is more to the 2016 murder of Seth Rich, a Jewish Democratic Party staffer. 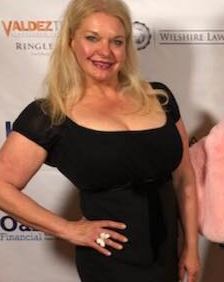 Most recently, Root said angered many in the Jewish community after saying: that Jews who vote for Democrats show “a total lack of knowledge or great disloyalty.”
He also said he has the right to tell Jews what he thinks because he is a Jew himself. In a Fox column, the 58-year-old Root refers to his “Jewish butcher father, David Root.” He told The Jewish Telegraphic Agency that all four grandparents are Jewish and that his DNA shows him “99.5” percent European Jewish.

One thing he is not is married. He divorced wife Debra Root in 2018 and was previously married to Victoria Creg-Payne.
Debra Root who goes by Debra Parks Root is the mother of the couple’s four children: Dakota, Contessa, Hudson and Remington.
According to social media, the former spouse and mother went to Glendale High School and attended Pepperdine University. The blonde is currently living in Henderson, Nevada.
Debra keeps a low profile and a reason for divorce is not clear.