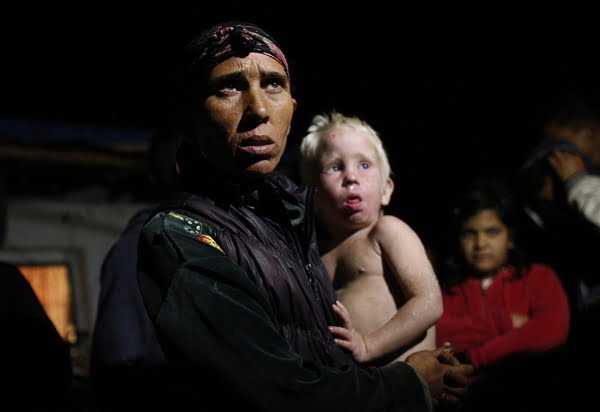 Sasha Ruseva, 35, claims that she is the mother of “Maria” the blonde angel found in a Greek gypsy camp last week.She also says that she wants her back.

Apparently, she really is little “Maria’s” mother. It has been confirmed- the DNA tests done prove so. Now, the question is did Sasha sell her baby or did she leave her behind due to poverty. The DailyMail has reported that this woman has been charged previously with selling babies in Greece. She and her husband Atana Rusev, 37, have 10 children. The Bulgarian-Roma woman says she had Maria while working in Greece and couldn’t afford the legal documents required to take her home to Bulgaria.

The couple who had the blonde angel living with them were identified as Hristos Salis and Eleftheria Dimopoulou. They have been arrested.

Sasha, who had her first child when she was just 13, says she left her child with her roommate in Greece, but after so long had forgotten her name. Five of her children are blonde like Maria, and her husband has the albino gene. There have been many different versions of this story coming out of Bulgaria, but one thing is obviously true: poverty has played a huge role in this story, and will continue to do so in millions more such sad tales. It is really heartbreaking to see how some children have to live.