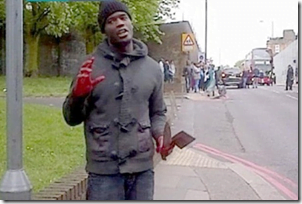 A chilling picture to watch no doubt about it. Yesterday in London one of the most abhorrent killings took place when a man identified today on internet forums as Michael Adebolajo; killed in cold blood a British soldier in front of dozens of witnesses. The horrible scene took place in Woolwich street.

Apparently this “mad man” didn’t act alone and him and his unidentified accomplice where on a list maintained by the security service but it is unclear what level of surveillance they were under! The unspeakable crime happened around 2:20 pm when the suspects ‘hacked and chopped’ at his body, before dragging his corpse into the middle of the road leaving a trail of blood. During the killing, Adebolajo and his accomplice chanted ‘Allah Akbar!’ – an Islamic phrase meaning ‘God is great’ – and yelling ‘this is what God would have wanted’.

Then next thing you know, the fundamentalist Michael Adebolajo appears ranting at a camera with steely, ****** hands after hacking the soldier. 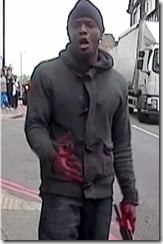 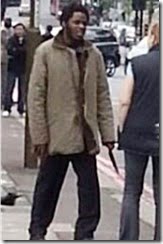 But, who is this man that went ballistic and had to use a machete and knives to kill another innocent??? Michael Olumide Adebolajo, was born in Lambeth in December 1984, he grew up in Romford and attended Marshalls Park School in Harold Hill.  The family lived in a modern £365,000 detached house in Hotchkin Avenue. A home that is, today, sealed off by police. 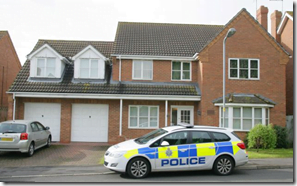 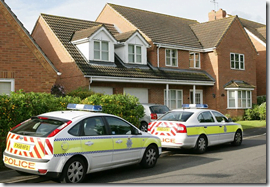 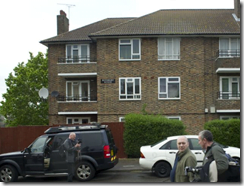 His younger brothers and sister attended Lincoln Christ’s Hospital school in the city. Shockingly the 28-year-old comes from a devout Christian family. His father, who has been named locally as Anthony Adebolajo, is believed to be a nurse who works in management within the NHS.

At the age of 15 or 16 he started getting involved in Islam and started to speak about Jihadi ideas. He joined several extremist groups – including Al Muhajiroun – that were banned in Britain and in 2003 converted to Islam, calling himself Mujaheed while at Marshalls Park School.

Fearing he had become radicalised, his parents moved him away from Romford in 2004 to the well-to-do village of Saxilby, six miles from Lincoln.

“He started getting involved with Islam aged about 15 or 16, and that is why his parents moved him away out of the area. It is utterly shocking to see what he has done. It’s unbelievable.”

And where is Adebolajo and accomplice now? Well after 20 long minutes of the attack, police arrived and opened fire against them. The pair currently remains under armed guard in two separate London Hospitals.