Meredith McIver is the very ashamed writer who helped with Melania Trump’s GOP National Convention speech, the one that has been causing a major stir after it was discovered Mrs. Trump’s speech was a little too familiar to one made by current first lady, Michelle Obama.

Meredith McIver is in fact, so sorry for her alleged screw up she tried to resign her job at the Trump Organization but Republican candidate, Donald Trump wasn’t having it.

Accoridng to reports, Meredith McIver said her mistake came when she received passages from Michelle’s speech given over the phone by Melania Trump, but did not check Mrs. Obama’s speeches.

Melania –who likes the First Lady –had watched some of her speeches for inspiration TMZ says, and read some of them to Meredith –who had been trusted to review the final speech. McIver then, wrote down what she heard from Melania Trump and later included some of the phrasing in the draft that ultimately became the final speech.

I feel terrible for the chaos I have caused Melania and the Trumps, as well as to Mrs. Obama. No harm was meant.”

She even presented her resignation on Tuesday but Donald Trump allegedly said she could learn from her mistake instead. 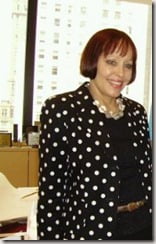 We bet you must be dying to know more about Meredith McIver, well you came to the right place. She is an in-house staff writer with the Trump Organization. McIver has previously work with Donald Trump and is listed in ghostwriting at number of his books, including “Think Like a Billionaire,” the 2004 publication by Trump on “success,” “real estate” and “life.”

The Times reports McIver was a “former ballet dancer and English major.”

Accoridng to the NY Daily News, McIver is described as a friend, who has helped Donald Trump write several books. She was chosen by Melania to help her personalize and revise her remarks after Mrs. Trump had rejected the aid of veteran speechwriters Matthew Scully and John McConnell for the gig.

In the statement made public today at her request, Meredith McIver, also says she is honored to work with the Trump family.

Do you really think such an important speech could’ve been this neglected?