It turns out Lisa VanArsdale works for Snuggling Buddies and was actually hired by the 45-year-old actor to do just that! Snuggle!

But in a weird twist, Lisa VanArsdale says Diggs not only offered her drugs but also thought she would be down to have *** with him!

The Snuggle Buddies is an online service, which charges $80 an hour for “platonic companionship” It’s a completely non-sexual thing, just to be clear.

Lisa VanArsdale talked exclusively to The National ENQUIRER and said she met Taye at a New York City restaurant on Sept. 9.

Two days later, he texted saying “Are u available for snuggling … Discretion is a must.”

She said the actor is her ultimate celebrity crush and agreed to do some of the things Diggs requested upon meeting, which includes, removing her bra so he could see her breast.

The late night session of snuggling lasted about four hours. Lisa VanArsdale allowed him to kiss her and stayed overnight but did not charge Diggs.

His bill at that point would have been $320, that’s how much a Snuggle sleepover costs. 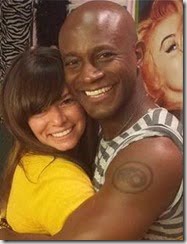 According to Radar Online, after Lisa VanArsdale removed her bra, she watched Diggs get naked and pleasure himself.

Lisa VanArsdale says the actor led her to believe he was single –and hence, that she had a chance. Once Lisa VanArsdale found out Taye Diggs is dating model, Amanza Smith she went crazy and is now spilling the beans about their ‘platonic’ encounter.

Feeling disappointed she texted him: “…You [led] me to believe you were single…What little trust I had left in me for men is completely gone because of you.”

Lisa VanArsdale is described as a nanny living in NY by HipHollywood. According to her Facebook page, she’s into pole dancing? You can check her out on FB here.

What would you do in Amanza Smith Brown’s place?