Joshua Efird is not only the boyfriend of 16-year-old Lauryn Mychelle “Pumpkin” Shannon but he recently became her fiancé!

The sister of honey boo boo and daughter of mama June got herself a man and they are taking things to the next level. According to reports, Joshua Efird proposed 2 days before Christmas. The event too place during dinner at a seafood restaurant. And yes, he gave her a ring.

Joshua Efird has been dating Pumpkin for the past several months, nine to be exact. Mama June spilled the beans to TMZ saying she, “approves Joshua Efird, mostly because he’s cool with taking things slow.”

According to June, her daughter and future son-in-law, are saving themselves for marriage.

The couple has agreed to marry once Pumpkin turns 18. Though, according to Georgia law, they could actually tied the knot any second now, since age of consent is 16 in the state. 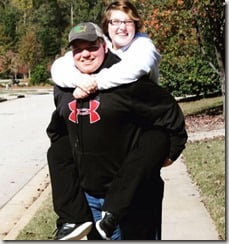 Then we have, Lauryn Mychelle, who turned 16-years-old just a few weeks ago. Her hometown is McDonough, Georgia and previously attended Hampton High School.

But not everyone is exactly excited for the young couple. According to Radar Online, Efird’s grandmother exclusively told them, she believes Josh and Pumpkin are jumping the gun. The concerned grandma said they are too young for marriage and that she hopes they have a long engagement. She also revealed as of now, they still live in separate homes.

The high school student has called Joshua Efird: “the most amazing and important man in my life.”

Pumpkin’s older sister Anna, tied the knot to Michael Cardwell in May 2014 and recently welcomed their first child. While mother,  June Shannon, is trying to work things out with her long time love “Sugar Bear” on WE tv’s Reality Boot Camp: Reality Star.