Kaitlynn Carter is the girlfriend of TV star and model, Body Jenner; a huge congrats is in order for the couple who got engaged just two days ago.

The couple revealed the news of their May 4th engagement on Friday, with an Instagram snap. So, it’s true ladies, Brody Jenner is officially off the market!

The couple who began dating in 2014, are currently on vacation at the Nihiwatu resort at Sumba, Indonesia. Brody revealed in his post, he popped the big question on Wednesday, adding “I got engaged to my lover and my best friend @kaitlynn_carter. “

The couple is joined by Kaitlynn’s parents and Brody’s mom, Linda Thompson.

Jenner’s love life has been on display from the get go.  How could we forget his public and tumultuous relationship with Playmate Jayde Nicole! Their fiery romance was often caught on The Hills cameras; or his on and off again relationship with Hills co-star, Kristin Cavallari.
From his TV romances on the Hills, he went on to have a serious relationship with pop star, Avril Lavigne. The couple dated from 2010 to 2012 and the pair got tattoo dedications to each other.

Brody has always been surrounded by lovely young ladies. He was also in a brief relationship with model Bryana Holly right before meeting Kaitlynn. 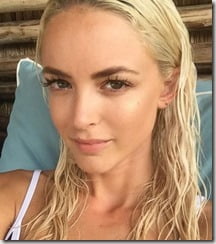 28-year-old Kaitlynn Carter is the daughter of Mark and Michelle Carter. Her parents have been married for 30 years.

The pretty blonde runs her own lifestyle blog called, thewesternwild. According to her website, Kaitlynn Carter was born and raised in southern New Hampshire, and has lived in Florence, Italy; Palm Beach, Florida; London; and most recently, Los Angeles.

She studied at the University of New Hampshire where she earned a B.A. in English. Kaitlynn worked in the financial services industry for several years, but reveals her real love is writing. She also enjoys photography, cooking and travel. She owns three dogs, 2 Rottweilers and a Puggle.

When not busy in some project, Kaitlynn Carter loves experimenting with fashion and design. 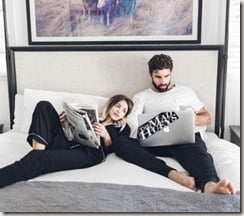 The goal for her blog is “to be a place where readers can learn new things, be inspired to try something different, and interact both with me and with each other.”

Carter also shares her candid thoughts on dating and relationships in a monthly Q&A. You can also fins recipes, beauty tips, travel diaries, playlist suggestions, quotes to live by and practical advice.

Kaitlynn Carter was not invited to Kim-K’s wedding, at the time, Brody’s famous half sister, didn’t’ think they were too serious.

Would Kaitlynn invite Kim to her special day?
You can find Kaitlynn Carter on Instagram here.