Don Damond was just weeks away from becoming the husband of late Aussie Justine Damond, a yoga and meditation instructor, who was shot and killed by a Minneapolis police officer outside of her home.

On Saturday night, reports say Don’s fiancé Justine Damond called the police herself when she believed she heard some type of disturbance in the alley behind her home.

At almost midnight on Saturday, when she met the officers outside in her pajamas, an officer inside of the car shot and killed Justine.

The blonde and smiling woman wasn’t found to be carrying a weapon.

Long story short, cops shot and killed an unarmed white yoga instructor in her pajamas who called them for help. Insane.

Justine who was a well-liked motivational healer, was born Justine Ruszczyk and used her fiancé’s name professionally. According to her LinkedIn profile, she described herself as a “Speaker, Coach & Consultant for Neuroscience & Meditation Based Change Initiatives.”

While her slaying became a top story in her native country, activists ins the US demanded a federal investigation and held vigils in Justine’s memory on July 16. 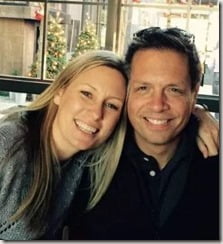 Don Damond currently serves as vice president and manager of Little Six Casino in Minnesota. Prior to his current position, he worked as a professional musician and a casino director of gaming operations.

He attended University of Minnesota and Normandale Community College.

Justine had moved from Australia to the United States in 2015 to be with Don Damond. According to close friends of the couple, Don popped the question shortly after she made the move.

The two met at a seminar by neurologist Dr. Joe Dispenza. The couple was set to be married this August.

Don Damond is the father of son, Zach Damond from another relationship. His 22-year-old son and Justine had a close relationship. He referred to her as his mother and best friend on social media.

Accordinf to the NY Daily News, Don Damond was away on a business trip at the time of the tragic shooting.

The officer who shot Damond was named by KTSP-TV as Mohamed Noor, the first Somali-American police officer in his precinct.

We send our condolences to Don Damond, his son and the rest of Justine’s family and friends.