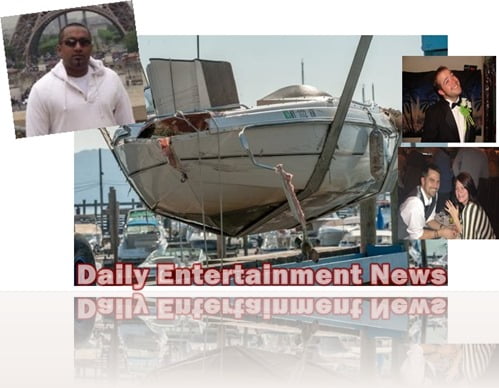 A terrible thing happened while Jojo K. John was driving a boat with some friends in the Hudson River, among those friends were bride-to-be Lindsey Stewart her soon-to-be husband Brian Bond his best man Mark Lennon, Jojo John who apparently was driving while drunk crashed the 19-foot Stingray bowrider into a parked barge loaded with heavy construction materials just south of the Tappan Zee Bridge killing Kimberly, Mark and sending Bond and himself to the  hospital.

30-year-old Lindsey Stewart from Piermont will never get to wear the beautiful wedding gown she was going to on her wedding day to her loving fiancée Brian Bond, her lifeless body was recovered from the waters of the Hudson River on Saturday 14 hours after the fatal crash. The body of Mark Lennon has not been recovered yet, the search for his body continues. Mark Lennon seen here (right) with his brother Ray and the second picture a happy Mark dressed for a wedding, what he would have wear for Briand and Lindsey’s wedding. Mr. Bond was rushed to the hospital and was treated with a broken eye socket among other injuries, the driver, also hospitalized was the driver Jojo K. John who has now been charged with three counts of vehicular manslaughter. Mrs. Stewart the loving daughter of Carol Stewart-Kosik, 60, and Michael Stewart, 65, was born on December 08, 1982 in Pearl River, NY. She met her future husband when they were just children, they became best friends and felt in love. They got engaged this February and planned to get married two weeks from now. Lindsey has on sister Allyson Stewart, 33, from Stratford, CT. Jojo is a relationship banker with JP Morgan Chase, he graduated in 200 with a BS and civil engineering from the University of Buffalo and in 2013 with MBA in Strategic Management from Pace University.