Joel Hradecky is a YouTube star who is also facing criminal charges. Hradecky is the man behind CustomGrow420, its outrageous cannabis challenges have garnered more than 700,000 subscribers.

According to TMZ, apparently Joel wasn’t thinking straight (wonder why) because he and two of his friends took a trip to the abandoned 348 ft. Vance Creek Bridge in Shelton, WA. The trio lit up blunts and smoked wax as they traversed the steel beams.

No one would have known they had trespassed, were it not for the fact that Joel recorded the hijinks and posted it to his now famous YouTube page.

To make it even easier for cops to find them, the license plate on their truck was clear as water on the video.

Joel Hradecky – or “Jolie Olie”, as he refers to himself –is a cannabis connoisseur who prides himself on consuming large quantities of green.

He creates increasingly challenging methods of smoking weed. His videos have been described as annoying at first but also highly entertaining.

For example, one of the most appealing things about his channel is the visible amount of agony Jolie puts himself through. He celebrated gaining over 250, 000 subscribers by doing 25 “dabs” consecutively as fast as he can. 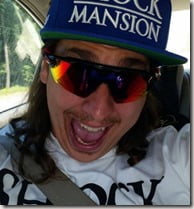 Hard to believe or not, it is not the first time Joel Hradecky gets in trouble with the law.

When Googling “Joel Hradecky” also brings up a Fox News report from 2006 in which a 22-year-old man with that name was arrested, along with four others, after allegedly terrorizing and robbing people in a park in Washington, Colorado, where Jolie is from.

The men were all identified by onlookers as juggalos, fans of the rap group Insane Clown Posse. Hradecky was charged with robbery and assault.

Accoridng to his Facebook page, Joel Hradecky calls Snowmass Village, Colorado,; his hometown. He attended “N. Hale University” He is listed as single, works for YouTube and writes in the about section: “HUD UP YOUTUBE, YOUTUBE WHAT UP!” He is friends with over 500 people of Facebook.

Accoridng to Vice, rumours abound on Reddit that his wife deleted a previous channel Joel Hradecky used to run– but these are unsubstantiated.